The Rat Scurries from the Vat: The Latest Coup in Rome 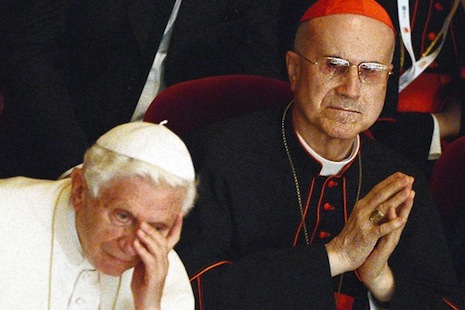 The Ex Pope and the New Pope? Joseph Ratzinger (l) and the palace coup-master, Cardinal Bertone

Theories are abounding this week now that the first pope in seven centuries is resigning his office. But as always, the most direct way to the truth behind the world’s oldest corporation is simply by following the money: and specifically, Vatican Bank money.

Let’s put to rest, first of all, the fallacy that "looming scandals" about child rape and coverup are behind Joseph Ratzinger’s resignation. That’s just the cover story.

Nobody in the church hierarchy is losing much sleep over their standing, canon-law endorsed policy of concealing and protecting child rapists in their ranks. Even the International Criminal Court application about such crimes has been stymied by catholic-run legislators and jurists.

What pronounced the death knell on Pope Benedict was his personal implication in the bribery and money-laundering practices of the Vatican Bank, comically known as The Institute of Religious Works (IOR); and how that dirty connection gave the anti-Ratzinger faction in the College of Cardinals the lever they needed to dump the obstinate German from the papal throne.

We had a whiff of that dump-Rat Boy agenda last year, when "Vatileaks" broke into the news with a ludicrous story of how Ratzinger’s loyal butler Paolo Gabriele disclosed the pope’s dirty secrets to the Italian media. In fact, the damning documents detailing Ratzinger’s secret rewarding of Vatican contracts to his friends and family members originated in the Vatican Secretary of State’s office, which the fall-guy butler could not have had access to.

The Secretary of State and the real power behind the papacy is Cardinal Tarcisio Bertone, an old insider who also engineered the sacking of Gotti Tedeschi, head of the Vatican Bank, last May.

Tedeschi had taken seriously the call of the European Parliament for "greater transparency" by the Vatican Bank /IOR, and was about to disclose to Brussels how his bosses had been laundering money for the mob for decades. The last Pope who had tried such a disclosure, John Paul 1, died from poisoning in September, 1978 after less than a month in office.

But even with Tedeschi silenced, the IOR house of cards kept tumbling, as the European Parliament seized from it 300 million Euros fraudulently acquired, and even the American Securities and Exchange Commission declared the IOR’s assets and practices "insecure". A major Vatican housecleaning was required; or at least, the appearance of one.

It was the pivotal Cardinal Bertone who leaked the pope’s diary and other incriminating papers to a catholic-friendly journalist in Rome last year the same month that Tedeschi was sacked, to prepare the world for Ratzinger’s removal. For it is Bertone who is now reaping the benefits of the papal housecleaning; he is not only a primary contender for the pope’s position but a key player in the IOR.

During my second speaking tour in Rome, in the spring of 2010, I met with several senior Italian senators and officials of the parliamentary Radical Party. They all said the same thing about why Joseph Ratzinger had been made pope, and what awaited him. To quote one of those politicians,

"Nobody becomes pope without a sordid past, because only with such liabilities can he be controlled by the Curia. It’s the same in any big company. Well, Ratzinger made many indiscretions as a Cardinal and made many enemies. His signing letters ordering criminal concealment was just one sin. He was to be the scapegoat for all of the trash that the church knew would surface"

So now, the papal scapegoat is gone, pensioned off to wherever ex-popes end up; and the time for the big face life has arrived.
The idea of applying cosmetic surgery to a decaying facade like the Church of Rome reminds me of Shirley Maclaine trying to look forty at the age of ninety. And yet appearances are everything in show business as well as in religion.

Tarcisio Bertone is about as institutional as you can get, and represents the old Italian crowd of the Curia and are part of the Mob-government-papal clique that run the country and the Roman catholic church. In the words of one of the Roman Senators I spoke with,

"You must understand that in my country, the Mafia and the government and the Vatican are all the same people, and they really have only one concern: protecting their assets."

Bertone, or whoever from the victorious ranks of his faction does assume the papal tiria, cannot be expected to do much but maintain the assets and security of the church, and that means by continuing the policies of silence and dissimulation that keeps the cash flowing. But their position is more difficult now in the wake of the enormous rifts developing within the wider church, where Cardinals are facing criminal prosecution for shielding child rapists, and talk of disaffiliating from Rome is widespread among Irish, American and German Bishops.

"We have all the grounds for a second Reformation now. That’s how serious is the crisis. The church will either rid itself of itself or face collapse" said an Italian media commentator recently.

It was easy to despise Joseph Ratzinger: the Hitler Youth raised, reactionary bigot who sacked liberal and independent thinkers in his church as the Cardinal-head of the Vatican Inquisition, and who told American Bishops that purgatory awaited any of them who did not cover up priestly child rape. Even among fellow Cardinals, he was known as "Joe the Rat".

But Ratzinger was a made to order object of hatred, and put there to play out the oldest game in politics: the venting of popular rage on a disposable figurehead so that the institution itself could proceed unscathed.

I doubt that it’s totally coincidental that Ratzinger was forced out of office so quickly barely ten days after our Common Law court published online hard evidence of the Pope’s involvement in crimes against humanity. Any new Pope will face the same charges, of colluding in a massive criminal conspiracy.

But the real issue is not who or what will replace Joseph Ratzinger as the latest figurehead, but how to displace the Vatican itself as a criminal power unto itself. And that struggle is just commencing. 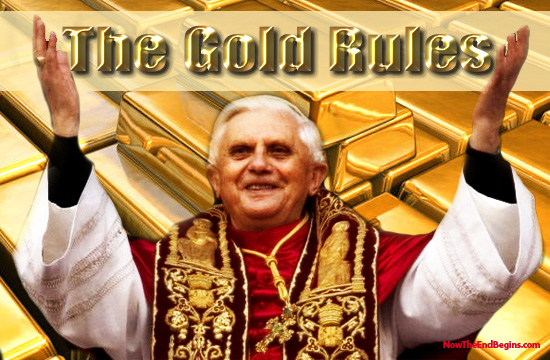 See the evidence of Genocide in Canada and other crimes against the innocent at www.hiddennolonger.com and at the website of The International Tribunal into Crimes of Church and State at www.itccs.org .

"I gave Kevin Annett his Indian name, Eagle Strong Voice, in 2004 when I adopted him into our Anishinabe Nation. He carries that name proudly because he is doing the job he was sent to do, to tell his people of their wrongs. He speaks strongly and with truth. He speaks for our stolen and murdered children. I ask everyone to listen to him and welcome him."
Chief Louis Daniels - Whispers Wind
Elder, Turtle Clan, Anishinabe Nation, Winnipeg, Manitoba
Tune into Red Ice Radio:

Kevin Annett - The Crimes Against Humanity by Church and State