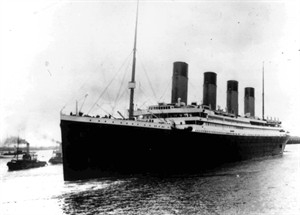 Nearly 100 years after the great ship Titanic went down in the freezing waters of the North Atlantic, a descendant of a crew member is claiming to know the truth about what really caused the disaster.

Louise Patten, the granddaughter of Titanic’s second officer, Charles Herbert Lightoller, alleges that the ship’s collision with an iceberg was caused by human error rather than bad luck.

She asserts that the man steering the ship when the iceberg was spotted, Robert Hitchins, panicked and turned the wheel in the wrong direction. Titanic’s steering required the helmsman to turn the wheel in the direction opposite to which he wished the ship to go. So when Hitchens was told to turn the ship to the left he cranked the wheel to the left, causing the boat to move right, the direction of the iceberg. The mistake was an easy one to make, as many new steamships had steering systems which moved the boat in the same direction as the wheel.

By the time the blunder was noticed, it was too late to avoid the impact. Patten claims her grandfather and other surviving crew members covered up the error to avoid tarnishing their reputations and to prevent the financial ruin of the White Star Line and the loss of jobs that would come with it.

Patten’s revelations coincide with the publication of her new novel ’Good as Gold,’ into which she weaves her account of events.

The helmsman’s mistake is not the only error Patten is seeking to expose. She also claims that the chairman of White Star Line, J. Bruce Ismay, insisted the ship continue sailing after the impact, causing Titanic to sink hours faster than was necessary. Patten says those extra hours could have prevented the deaths of more than 1,500 passengers.

Watch the video below for more details about Patten’s shocking claims.