Turin Shrouds Its Magic, Black and White, in Plain Sight 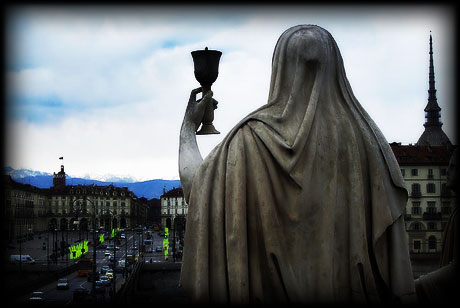 In front of Turin's Gran Madre di Dio church is a statue of a woman holding up a grail. Other monuments hint at an occult underworld in this Italian city.
Turin is a magical city -- but not the kind of magic one associates with dreamy fantasylands or Disney. Case in point: In a candle-lit wine bar in the Quadrilatero Romano, a buddingly hip district for wining and dining in central Turin, two 20-something locals were trying to show me which city landmarks can be connected to make up a Satanic pentagram. A growing chorus of dissenters began to surround our table, everyone throwing out their own versions of the five-pointed star.

Finally, the bartender, shaking his finger at us, silenced everyone. "No, no, no! The Mole isn't part of the pentagram," he said, referring to the 530-foot spire-like tower that dominates the city's skyline, as he came around the bar and grabbed the pen out of my hand. After drawing lines on my map between squares, churches and monasteries to form a five-pointed star, he handed the pen back to me and said, "There. You want another glass of Barolo?"

Even though I have traveled from the tip to the top of the boot several times, Turin had never been on my radar. Maybe it was its location, wedged up against the Alps in the northwest corner of Italy. Or perhaps it was the off-putting appellation "the Detroit of Italy" that always had me traveling in the opposite direction. Despite Turin being the home of writer Primo Levi, the birthplace of vermouth and the headquarters of the Slow Food movement (in nearby Bra), I've always eschewed the place for more obvious Italian locales.

But the city is more than a series of Fiat plants (that are now being converted into industrial-chic shopping malls and hotels, by the way). Beyond Turin's grand squares, 10 miles of arcaded walkways and elegant Baroque palaces, one barely needs to scratch the surface to discover what some people see as the city's intriguing supernatural side. I quickly learned (from about every local I spoke to) that Turin lies on the axis of white magic (along with Lyon, France, and Prague) and the axis of black magic (which it shares with London and San Francisco), making it one powerful place, if you believe in that stuff. Regardless, the legion of devilish faces carved into the sides of palaces, mysterious sundials painted on the sides of churches, and Masonic symbols scattered throughout the historical center makes for an intriguing walk around town.

After finishing off my glass of ruby-red Barolo, I thanked my new friends and headed for the Gates of Hell. Piazza Statuto, an oval-shaped square on the western periphery of the historical center, is the starting point for a popular guided tour called Magic Turin, which takes visitors to sights related to the city's supernatural side.

My guide, Emanuela (who was not clad in Goth gear, by the way), commenced the tour in front of the small pond that lies next to an art deco, pyramid-shaped monument on the square. The monument, topped by a dark angel who hovers above graceful sculptures of men trying to reach the top, is a memorial to the workers who died building the Frejus Train Tunnel, which finally linked Italy to France by rail. For others, according to my guide, it's a clue to what lies beneath: the Gates of Hell. The esoteric symbols (that it's a pyramid, apparently, is one tip-off) and the five-pointed star at the top of the angel's head hint at something darker. "Many people believe the angel is Satan himself," she added.

"However you interpret this monument," Emanuela said, "there's no denying that on and around this square, bad things have happened." The Roman and medieval-era gallows are just beyond the square, and the ground we stood on is a millenniums-old necropolis, the Romans adhering to the Egyptian concept that the west, where the sun sets, is the most appropriate place to bury the dead.

We had begun our tour on the dark side of town, but once we hit the plus-size Piazza Castello, Emanuela announced we'd crossed over. "Here, supposedly, is the highest concentration of positive energy -- mostly because of the Shroud." Of course, she was talking about the famed Shroud of Turin, the cloth that many believe covered the body of the crucified Jesus Christ. Pointing to an iron gate that separates the square from the grounds of the ornate Royal Palace, Emanuela said the Shroud was publicly displayed here. (It's now housed in the nearby Duomo.)

Then she nodded to a sculpture with a five-pointed star on its head at the top of the gate, which was reminiscent of the one atop the Frejus Tunnel pyramid back at Piazza Statuto. "Note the direction the figure is looking in," Emanuela said. "Many people believe this figure -- a symbol of white magic -- is looking toward the image of Lucifer back on Piazza Statuto. Their eyes are meeting, and good and evil marry together. It's like Turin itself, a duality of good and bad; one cannot exist without the other."

Throughout the Magic Turin tour, my guide kept referring to the books of a local writer named Giuditta Dembech. And so the next day I went to see her.

Sitting in her historical center apartment crammed with crystals and images of angels, Dembech tried to explain the complex theory about energy and its relation to Turin. According to Dembech, there are parallel lines running up and down the Earth that produce energy. Sometimes the natural landscape -- mountain ranges, for example -- can block the energy from escaping. But in some cases, particularly in places that are rich in granite, the energy flows out of the Earth like a spring.

"Just look on a map," she said. "There are a lot of spiritual places that follow this same line -- Stonehenge, Turin, Jerusalem and Mecca."

Of course, even if locals are able to regale visitors with tales about the city's long-standing relationship with energy and the occult, not everyone is a believer. Massimo Introvigne, the director of Turin's Center for Studies on New Religions, is among the skeptics. In an interview, he told me that 90 percent of the story is legend. The part that is true, he explained, lies in the city's influential role in uniting Italy in the mid-19th century. In a nose-thumbing gesture at the pope (a staunch opponent of a unified Italy), the ruling Savoy family, which would go on to produce Italy's first king, invited persecuted religious groups to come to Turin to worship freely. Protestants, Jews and even Mormons fled to Turin. (The Book of Mormon was translated into Italian for the first time in Turin.) To the Catholic Church, Turin had become a city of cults.

Which provided the groundwork for what happened in the 1960s. "Some pranksters forged a historic document, claiming Turin had 40,000 Satanists," Introvigne said. "It wasn't true, but when the local newspaper wrote a story about it, people believed it."

And the axes of black and white magic? "Yes," Introvigne added with a wry smile, "that was part of the forgery, too."

Back on the Magic Turin tour, Emanuela and I are walking across the Po River, approaching the stark white Gran Madre di Dio. This 19th-century church, modeled after the Pantheon in Rome, is the culmination of a tour that was enjoyable, entertaining and -- dare I say it -- educational. Emanuela points out a statue in front of the church. It's a woman holding up a grail, as if she were toasting the city in front of her and perhaps looking in the direction in which the Holy Grail -- the famously sought-after cup that, according to legend, Jesus drank from during the Last Supper -- is buried.

"Turin is the city of relics," Emanuela said. "In addition to the Shroud, there's also a church here that has a piece of the True Cross. If the Holy Grail is here, it completes the trilogy of Christ relics."

"Trilogy?" I said. "I learned earlier this church was supposed to make up a giant pentagram."