US Military Finds Mineral Riches in Afghanistan - Wow, what a Surprise! 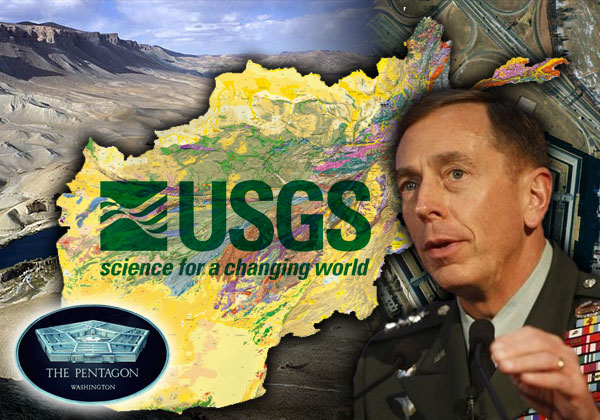 Ed Comment: Can somebody tell me why it's the Pentagons job to go hunt for minerals in countries they invade? Do you think these resources will be to the benefit of the Afghan people ... or even the American people who paid for the war? I don't think so!

A team of U.S. geologists and Pentagon officials has discovered vast mineral wealth in Afghanistan, conceivably enough to turn the scarred and impoverished country into one of the world's most lucrative mining centers, The New York Times reports.

"There is stunning potential here," Gen. David H. Petraeus, commander of the United States Central Command, told the paper in a report published Monday. "There are a lot of ifs, of course, but I think potentially it is hugely significant."

Americans discovered nearly $1 trillion in untapped mineral deposits in Afghanistan, including iron, copper, cobalt, gold and critical industrial metals like lithium, according to the report. The Times quoted a Pentagon memo as saying Afghanistan could become the "Saudi Arabia of lithium," a key raw material in the manufacture of batteries for laptops and cell phones.

During a visit last month to Washington, Afghan President Hamid Karzai said his nation's untapped mineral deposits could be even higher — perhaps as much as $3 trillion.

The mineral resources are a "massive opportunity," Karzai said at a May 13 event with Secretary of State Hillary Rodham Clinton held at the U.S. Institute of Peace.

The report in the Times said the U.S. Geological Survey began aerial surveys of Afghanistan's mineral resources in 2006, using data that had been collected by Soviet mining experts during the Soviet occupation of Afghanistan in the 1980s. Promising results led to a more sophisticated study the next year.

Then last year, a Pentagon task force that had created business development programs in Iraq arrived in Afghanistan and closely analyzed the geologists' findings. U.S. mining experts were brought in to validate the survey's conclusions, and top U.S. and Afghan officials were briefed.

So far, the biggest mineral deposits discovered are of iron and copper, but finds include large deposits of niobium, a soft metal used in producing superconducting steel, as well as rare earth elements and large gold deposits in Pashtun areas of southern Afghanistan, the report said.

In an op-ed published last month in a London newspaper, former Afghan finance minister Ashraf Ghani, wrote: "Afghanistan is rich in minerals including copper, iron, marble, chromite, manganese and emeralds. With good governance in place, these assets can generate funds."