Jan 17, 2009 Source: video.google.com
The story of King Leopold II of Belgium’s brutal colonisation of central Africa, turning it into a vast rubber-harvesting labour camp in which millions died. 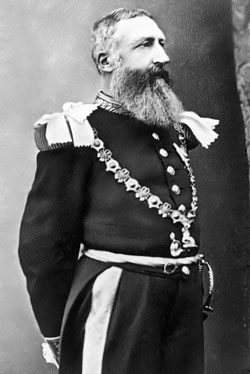 Tonight, Belgian television will show the BBC documentary "White King, Red Rubber, Black Death," about Belgian King Leopold II’s reign of terror in his private Congo colony in 1885-1908. The documentary, hardly the stuff of controversy anywhere else, almost didn’t make it onto the airwaves here.

Louis Michel, the Belgian foreign minister, and the Royal Palace both pressured state television not to broadcast "White King." The Royal Palace expressed its "concern" about the documentary’s "historical accuracy." "This is a partisan work and its thesis is completely one-sided," Mr. Michel said. "The film is a biased diatribe."

As a compromise the state television documentary was "put into the right context" by Belgian "specialists." Jan Van den Berghe of Belgian television says: "We have had the facts qualified by Belgian specialists such as the curator of the Royal Museum of Central Africa in Tervuren."

The blood-stained history of the former Congo Free State isn’t much in dispute anywhere except in Belgium, where it is seldom mentioned. The CFS was a private colony of Leopold II’s until 1908 when he sold it to Belgium. He turned the CFS into a labor camp, laying the foundation of his immense personal fortune. His managers on the ground -- the king never set foot in the Congo himself -- used mutilation and killing to get the natives to bring in the rubber. Often, wives and children were taken hostage without food or water to speed up the work. In the 23 years of CFS rule, about half the Congo’s 20 million inhabitants perished.

But why should Belgians of today deny this history, or get upset about a BBC documentary? A major reason is the artificial nature of the Belgian state. Francophone Belgian newspapers suggested last week that by discrediting Leopold II’s record, the BBC tarnished the image of Belgium’s monarchy today, thereby undermining Belgian national unity. The Belgian state houses two peoples -- Dutch-speaking Flemings and French-speaking Walloons -- in an uneasy balance.

The monarchy is seen by many as the glue keeping a state together that lacks a unifying national identity. Leopold understood the problem. He thought a common project of colonization by Flemings and Walloons would bring the nation together. In his diary in 1861, he wrote it was "a patriotic duty" to create "a Belgian Empire." The Belgians, lacking in nationalist feelings, wanted nothing to do with Leopold’s dream. For years, until international indignation forced Belgium to take over in 1908, Belgian politicians kept their distance. Jules Malou, a late 19th century prime minister, said that he assumed it to be "not a bad thing that a King like ours should have a favorite hobby to drain off his surplus energy."

However, Leopold had his Belgian supporters, mostly among the French-speaking half of the country then more committed to building Belgium. Leon Hennebicq, in 1904, called Belgium "the laboratory of Europe." "Indeed," he wrote, "we are a nation under construction." The country is characterized by an identity of non-identity. Belgium is a post-national state and as such, according to some, the model for the future Federal Europe.

The central role is played by the king. Being neither Fleming nor Walloon, the king is an independent arbiter. No one may ever question his motives. Without the civic glue that binds countries with a national identity, Belgium would not have survived but for its social welfare system and its royal family. "The monarchy is the only way to keep an artificial country such as Belgium together. In a homogeneous country, I would be a republican, but not in Belgium," Belgium’s Socialist leader Louis Tobback said in 2001....

Article from: Why Belgium Is Denouncing a BBC Documentary About the History of the Congo