May 29, 2015
Dr. Greg Johnson is the editor-in-Chief of Counter Currents and its journal and webzine North American New Right. He is the author of "Confessions of a Reluctant Hater" and also "New Right vs. Old Right." Greg joins us to share his insights on the current trend of pathological altruism that has taken hold of certain northern European countries, which is leading to a demographic destruction of native cultures through extreme immigration policies. Greg talks about his recent trip to Sweden, a country that appears to be all prosperity and Whiteness on the surface, but is truly suffering from very real problems created by an insulated elite political body with a fix-it-all attitude promoting mass immigration and radical diversity. Greg speaks about ice age hunter-gatherer descendants of northern Europe who built individualistic, trust-based societies, and he explains the different mentality that exists for ethnically defined tribal in-groups of the south and Middle East. He emphasizes how fundamental differences between in-groups is an invitation for exploitation and parasitic relationships. Then, we look at the widespread, misconceived attitudes today’s adults and parents have concerning passing on values to our youth, as well as the politically correct evolutionary rut that Whites have fallen into in the name of high-minded openness. In the members’ hour, we get into the religious aspect of unifying the ranks of the nationalist political movement and the need to disband the anti-White policies within Christian churches. We break down the construction of Christianity in Europe that brought with it the bloody destruction of native European spirituality and the tendency for pre-Christian religions and cultures to be regarded as an error. Greg underlines the net effects of being uprooted from ones traditions and superficially implanted within belief systems that lack identity. We also discuss the religion of liberalism, the (non)assimilation of immigrants, and the architects of White genocide. Later, we ask ourselves how we can get the conspiracy crowd to see the full measure of Israel’s masterpiece conspiracy. In conclusion, Greg defines the way to understand hegemony, namely harnessing the superior ability to adapt to changing circumstances. 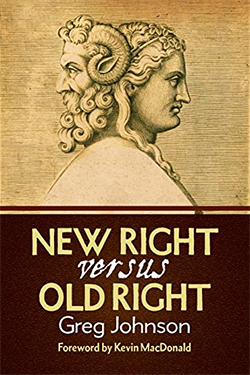