Gnosticism, The Antichrist, One World Religion & 2012

Jan 7, 2010
Comparative mythologist, author and teacher John Lash returns to the program to discuss "The Mysteries", Religion, Gnosticism, Mystery Schools and the alleged connection to the Globalist Elite. Many different researchers in the alternative research community claim that the elite powers are stepped in the "Mystery religions". They are accused of practicing paganism and occult rituals. Is this true? Is it true paganism? Can this myth be clarified further and can it be defined with more appropriate terminology? Topics Discussed: The Mysteries, The Pagan Mysteries, 415 AD, Friedrich Nietzsche, Thus Spoke Zarathustra, Salvationism, The Superman, Gnostics, Deification, Devine Intelligence, Pagan People, Roman Empire, Messiah, Execution of the Gnostics, Etruscans, Human Psychosis, Pathology, The Globalist Game, Serial Killers, Sociopaths, Ted Bundy, Occult Techniques, Subconscious Suggestions, Orchestration of Social Evil, Black Magic, Sophia Myth, the Re-emergence of the Mystery Schools, Theosophist, Organic Light, Counter Magic, Immunity to Resist the Dementia, Shamanism, Psilocybin Mushrooms, Iboga Cult, Voracious, The Expose of the New World Order, Archons, Mind Parasites, Pagans and much more. We continue to talk about the insertion of the idea of the Anti Christ figure into Christianity and what function this might carry on a bigger scale. John poses the question of why the Gnostics or the disciples of the Myth of Sophia, didn't do anything to protect themselves from the persecution and extermination of knowledge. Well, maybe they did in a way and this is related to the idea of the Anti-Christ. We talk about the New World Order and their plans of control to bring the planet under a One World Currency, a One World Government and a One world Religion. We talk more about the One world Religion and the presentation of a Messiah figure in 2012 and who it might be, or at least what it will be coming from. We talk about 2012, why this date if there's nothing to the planetary alignment of the ending of the Mayan Calendar around this time. We talk about Melchizedek, the Bahai Faith and how the plan might unfold. This is a really interesting discussion with some of John's most recent ideas and theories about the immediate future. At the end we also talk about the true name of Gaia and for those who are curious how you'll go about calling out the true name of Gaia. This is connected with the Planetary Tantra section on metahistory.org.

Mycelium Running: How Mushrooms Can Help Save the World

Transformations of Myth Through Time

Alchemy and Mysticism: The Hermetic Museum 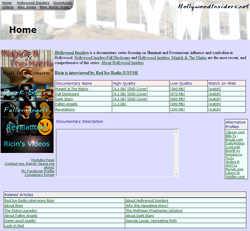