Lloyd Pye is an author and researcher widely known for his work with the Starchild Skull and for his best selling nonfiction book Everything You Know Is Wrong. Pye began writing fiction with a hard-hitting novel about college football based on his college career, followed by a hi-tech Cold War spy thriller, then he became a screenwriter in Hollywood before finding his truest passion in writing alternative nonfiction. For the first hour, Lloyd discusses the origins of humans, genetic experimentation and the Intervention Theory. Topics Discussed: hominoids, Ivan T. Sanderson's ”Abominable Snowmen”, the fossil record, human evolution and the missing link, Miocene apes, alien and UFO resistance, the Minnesota iceman, genetically engineered humans, primates and humans, junk DNA, microevolution/macroevolution, cuneiform stone tablets, Zecharia Sitchin, the seven daughters of Eve, genetically engineered plants and animals, brain useage, autistics, Anunnaki, angels, and Nephilim. In the second hour, Lloyd Pye talks about the Starchild Skull which was found in Mexico, 100 miles south of Chihuahua in a mine tunnel, by a young girl in the 1930’s.

The Seven Daughters of Eve

Everything You Know Is Wrong -- Origins of Life and Humans 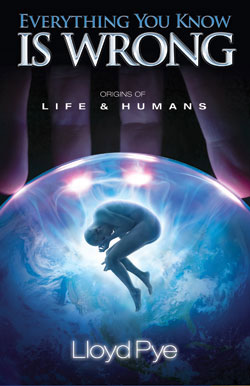