Apr 10, 2008
First the first part of this program, Dave Truman, the man behind the "Beyond Knowledge Conference", joins us to discuss the event in Liverpool, England. Then we are joined by airline captain, scholar and author Ralph Ellis to discuss his latest book "King Jesus - From Kam (Egypt) to Camelot". Ralph Ellis is an airline captain with a distinctly lateral, open-minded view on history and religion. He has written five books so far, which purport to explain every last facet of man's history. Under this new concept, the pyramids of Egypt become the central cathedral complex of the early Israelites, who were, in fact, the Hyksos Shepherd Kings of Lower Egypt. Topics Discussed: St Paul (Saul) as Josephus Flavius, priests, kings and titles, Jesus, from Cleopatra to Christ, exiles and expulsions, the empires of the day: Persia, Rome and Egypt, royalty and rich families in Judea, Ourania, Thea Muse, the new city of the planned empire: Palmera (at the border of Syria & Persia), Jesus of Gamala, Vespasian and his wounded oracle, and much more. During hour two, we continue discussing Jesus’ expulsion to England (The British Isles), the prison colony of the Roman Empire at the time. What happened there? Where did he go? Are there myths in England about this? More Topics Discussed: The Zodiac Temple in Chester, the fish symbol (Pisces), the "Reversed Miracle" by Vespasian, Kam (Khemet) and Camelot, Solomon's temple, taxes, the Jewish rebellion, King Jesus fought and lost the war, The Egyptian: Artu-ii similar to Arthur, the cup of Christ, the twelve knights of the round table and the twelve disciples of the last supper table, The British Israel Movement, King Arthur, the blood line of Jesus, castration, Mary Magdalene, Queen Cleopatra Selene and the Statue of Liberty, the importance and symbolic reference to "the stone" and much more.

The Tombs of King David, King Solomon and the Queen of Sheba Discovered

Who Were The Magi?

King Jesus, from Kam (Egypt) to Camelot. (King Jesus of Judaea was King Arthur of Britain)

Cleopatra to Christ & Scota, Egyptian Queen of the Scots

Jesus, Last of the Pharaohs

King of Edessa & The Omphalos StoneMary Magdalene, House of Orange, The Reformation & The Threat of IslamThe Biblical Shepherd Kings, Egyptian Hyksos Pharaohs & The ExodusesEpisode 4 - Symbolism in LogosPharaohs in Egypt, The BIble, The Hyksos, King Solomon & Cleopatra to Christ 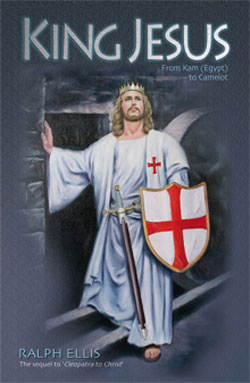