Dec 24, 2006
Investigative mythologist William Henry talks about how his journey began as well as his book "Starwalkers and the dimensions of the Blessed". He addresses topics such as the Mayans, the galactic alignment of 2012, the Annunaki, the Nephilim, the Holy Grail and the connection to Kundalini Energy. Also, he talks about etymology, word play, the connection to Babel, the tower and the English language. We continue our discussion with William in hour two and move into the area of technology including stargate technology, transhumanism, cyborgs and nanotechnology. We talk about the recent addition to the particle accelerator at CERN called ATLAS. Additionally, William elaborates on the concept of Jacob's ladder, Rennes le château and the connection to Sirius and the black stone of the Caba.

Starwalkers and the Dimension of the Blessed

The Judgment Day Device2012 Olympics SpecialThe Secret of Sion & The Dwellers at the Center of the GalaxyThe Apotheosis is at Hand, NWO, COP15, Norway Blue Spiral & Star Gates 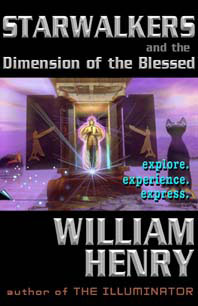