Feb 20, 2015
Mike King is a private investigative journalist and researcher based in the New York City area. A 1987 graduate of Rutgers University, King's subsequent 27 year career in Marketing & Advertising has equipped him with a unique perspective when it comes to understanding how "public opinion" is scientifically manufactured. His website, Tomato Bubble, is a platform for disseminating alternative history, philosophy and current events. Mike returns to Red Ice Radio to enlighten listeners about his groundbreaking book, The Bad War: The Truth Never Taught About World War 2. Mike illustrates the timeline of events of this shameful episode in history beginning in 1848, where the story of WW2 begins – the year known as "The Springtime of the People," when "spontaneous" revolts broke out across Europe and South America. He explains how during this time the Rothschild family and their web of British operatives began hijacking Europe in an attempt to destabilize the Old World and bring about Democracy. We look at the establishment of the Reuters Telegram Company, the first Zionist news giant to take control of the press and the official narrative of the events leading up to WW2. Mike takes us back to the period prior to WW1 when the German Reich was formed and through its unification, Germany began to grow and out-produce both France and Britain, attracting a lot of envy. He talks about the League of the Three Emperors, an alliance organized to defend Eastern Europe by blocking British and French intrigue and suppressing internal communist movements – a defensive whose destruction would lead to the formation of the New World Order. We examine NATO, the alliance formed between Britain and France after WW1 – a corrupt and deceitful organization who sought to provoke war and dismantle empires throughout Eastern Europe. Then, Mike will explain the events leading up to WW2, including Germany's pleas for reason and peace up until the 11th hour, the blame for instigating the war Germany was tricked into accepting, the monstrous Treaty of Versailles, and the formation of the Zionist Arab Spring enclave by Lord Rothschild. In the second hour, Mike explains Poland's important role in WW2, a country that is always portrayed as a helpless innocent and a victim of Hitler's bullying, and the myth of Belgian/Dutch neutrality. Then, we'll talk about Hitler's stance against the war, his letters to the Vatican pleading for peace, and Britain's refusal to hold mediations. Further, Mike tells us about the propaganda of the controlled Western press, the vilification of Hitler, and the real Hitler who ruled the people's hearts, held nearly universal support, and was considered a national hero at the time. We'll end by discussing the genocide of Germans after the war, the atrocities and crimes against Northern Europe that have been erased from the pages of history, and what we can do to bring light to the big lie of the past 75 years of history.

The British Mad Dog: Debunking the Myth of Winston ChurchillPlanet Rothschild & The Lie of DemocracyFerguson: New Norm of Madness & The Hitler-in-Argentina HoaxYazidis, World War II Untangled & Degeneracy of the West 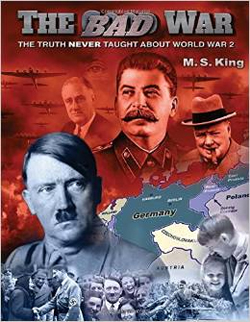