Sep 10, 2014
Mike King is a private investigative journalist and researcher based in the New York City area. A 1987 graduate of Rutgers University, King's subsequent 27 year career in Marketing & Advertising has equipped him with a unique perspective when it comes to understanding how "public opinion" is indeed scientifically manufactured. Madison Ave marketing acumen combines with 'City Boy' instincts to make Mike King one of the most tenacious detectors of "things that don’t add up" in the world today. We’ll start the discussion on the Yazidi minority of Iraq, who are of Aryan descent and who have retained much of their fair skin, reddish and blond hair, and blue eyes by marrying among themselves. The US-Israeli-Saudi controlled terror group known has ISIS vowed to impregnate the White hostages, to smash their bloodline. Then, we’ll discuss the Jewish supremacy’s utter hatred for Aryan people. Mike also speaks about other small minority tribes of White Indians around the world who have been hunted down for genocide in the past. We speak more on ISIS, the war against Putin and the west’s freefall into degeneracy. In the second hour, we’ll discuss the most demonized man in history, Hitler. Mike elaborates on Nazi Germany’s system of economy and Hitler’s war against the new world order system. He’ll talk about what happened when Judea declared war on Germany and he expounds on anti-Nazi propaganda that was used as a weapon. Also, we cover Nazi Germany’s view on art and entertainment. Later, we’ll talk about how globalists blame WWII on nationalists and not the global elite. At the end we discuss the Germany/Poland conflict and the Hitler/Stalin pact.

tomatobubble.com
History Repeats: Dead Blondes on a Mountain Top
Document Confirms British were Plotting to Invade Germany Before Germany Invaded Poland
Judea Declares War on Germany
The Treblinka Archaeology Hoax
Yazidis
Right now you are infidels. After this, you will become Muslims and you will have rights': The moment hundreds of Yazidis converted en masse to Islam to avoid ISIS execution
Hitler Visits Oprah
The History of Political Correctness
Desperate Christians in Iraq beg West to send in troops after beheadings, crucifixions
Why Hitler Invaded the Soviet Union
Swedish Artist Dan Park Jailed 6 Months For ’Race Hate’ Pictures
What is it like to be red-haired? Red-heads set for extinction

The British Mad Dog: Debunking the Myth of Winston ChurchillPlanet Rothschild & The Lie of DemocracyThe BAD War: Chronology of Events, from 1848 - WWIIFerguson: New Norm of Madness & The Hitler-in-Argentina Hoax

Jon Hopkins - Cold Out There 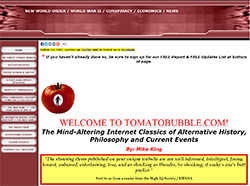