An Afghan Mystery: Why Are Large Shipments of Gold Leaving the Country? 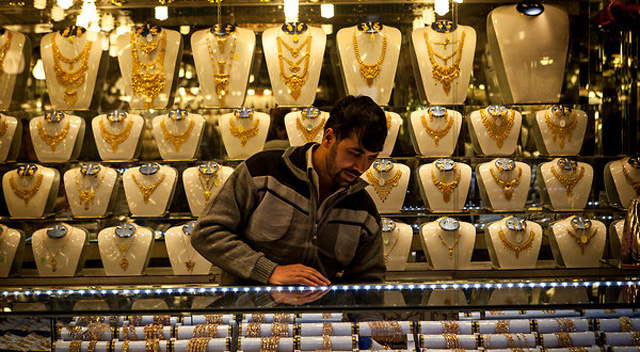 Packed into hand luggage and tucked into jacket pockets, roughly hewed bars of gold are being flown out of Kabul with increasing regularity, confounding Afghan and American officials who fear money launderers have found a new way to spirit funds from the country.

Most of the gold is being carried on commercial flights destined for Dubai, according to airport security reports and officials. The amounts carried by single couriers are often heavy enough that passengers flying from Kabul to the Persian Gulf emirate would be well advised to heed warnings about the danger of bags falling from overhead compartments. One courier, for instance, carried nearly 60 pounds of gold bars, each about the size of an iPhone, aboard an early morning flight in mid-October, according to an airport security report. The load was worth more than $1.5 million.

The gold is fully declared and legal to fly. Some, if not most, is legitimately being sent by gold dealers seeking to have old and damaged jewelry refashioned into new pieces by skilled craftsmen in the Persian Gulf, said Afghan officials and gold dealers.

But gold dealers in Kabul and current and former Kabul airport officials say there has been a surge in shipments since early summer. The talk of a growing exodus of gold from Afghanistan has been spreading among the business community here, and in recent weeks has caught the attention of Afghan and American officials. The officials are now puzzling over the origin of the gold — very little is mined in Afghanistan, although larger mines are planned — and why so much appears to be heading for Dubai.

“We are investigating it, and if we find this is a way of laundering money, we will intervene,” said Noorullah Delawari, the governor of Afghanistan’s central bank. Yet he acknowledged that there were more questions than answers at this point. “I don’t know where so much gold would come from, unless you can tell me something about it,” he said in an interview. Or, as a European official who tracks the Afghan economy put it, “new mysteries abound” as the war appears to be drawing to a close.

Figuring out what precisely is happening in the Afghan economy remains as confounding as ever. Nearly 90 percent of the financial activity takes place outside formal banks. Written contracts are the exception, receipts are rare and statistics are often unreliable. Money laundering is commonplace, say Western and Afghan officials.

As a result, with the gold, “right now you’re stuck in that situation we usually are: is there something bad going on here or is this just the Afghan way of commerce?” said a senior American official who tracks illicit financial networks.
There is reason to be suspicious: the gold shipments track with the far larger problem of cash smuggling. For years, flights have left Kabul almost every day carrying thick wads of bank notes — dollars, euros, Norwegian kroner, Saudi Arabian riyals and other currencies — stuffed into suitcases, packed into boxes and shrink-wrapped onto pallets. At one point, cash was even being hidden in food trays aboard now-defunct Pamir Airways flights to Dubai.

Last year alone, Afghanistan’s central bank says, roughly $4.5 billion in cash was spirited out through the airport. Efforts to stanch the flow have had limited impact, and concerns about money laundering persist, according to a report released last week by the United States Special Inspector General for Afghanistan Reconstruction.

The unimpeded “bulk cash flows raise the risk of money laundering and bulk cash smuggling — tools often used to finance terrorist, narcotics and other illicit operations,” the report said. The cash, and now the gold, is most often taken to Dubai, where officials are known for asking few questions. Many wealthy Afghans park their money and families in the emirate, and gold dealers say more middle-class Afghans are sending money and gold — seen as a safeguard against economic ruin — to Dubai as talk of a postwar economic collapse grows louder.

But given Dubai’s reputation as a haven for laundered money, an Afghan official said that the “obvious suspicion” is that at least some of the apparent growth in gold shipments to Dubai is tied to the myriad illicit activities — opium smuggling, corruption, Taliban taxation schemes — that have come to define Afghanistan’s economy.

There are also indications that Iran could be dipping into the Afghan gold trade. It is already buying up dollars and euros here to circumvent American and European sanctions, and it may be using gold for the same purpose.

Yahya, a dealer in Kabul, said other gold traders were helping Iran buy the precious metal here. Payment was being made in oil or with Iranian rials, which readily circulate in western Afghanistan. The Afghan dealers are then taking it to Dubai, where the gold is sold for dollars. The money is then moved to China, where it was used to buy needed goods or simply funneled back to Iran, said Yahya, who like many Afghans uses a single name.

He declined to name those involved in aiding Iran. But Western officials said his description of how the process worked tracked with their knowledge of money laundering networks that operate in Afghanistan and the surrounding region.

Before officials can say whether the gold shipments are part of an illicit financial scheme, though, they first have to figure out how much gold is going out — or, for that matter, coming in.

It is a task easier said than done. The Finance Ministry, which is supposed to collect taxes on each shipment, did not have figures, said Wahidullah Tawhidi, a spokesman for the ministry. He suggested that the Commerce Ministry would know. The Commerce Ministry did not, and officials there said it would be best to contact airport customs officials.

At the airport, a reluctant customs official, who spoke only on the condition of anonymity, brushed aside concerns that there had been an uptick in gold shipments out of Afghanistan. He then ended the conversation with the cryptic promise to one day share “the real story of what is happening to the gold.”

M.Y. Rassuli, the president of the airport, said shipments had begun increasing over the summer. He said that he could not offer specifics because he deals with operations, not customs. But he expressed frustration about the problem. “If it’s 5 kilograms or 500 kilograms, that’s not a normal thing to transfer,” he said in an interview. “This is why Afghanistan is No. 1 in corruption.”

Without knowledge of how much gold is leaving, it is impossible to calculate the value of the trade. But airport security forms that cover the last two weeks of October indicate about 560 pounds, worth about $14 million, were carried by hand out of Afghanistan during that period.

That is a princely sum in one of the world’s 10 poorest countries. But it is perhaps a measure of the current state of affairs in Afghanistan that seemingly no one — not Afghan bank regulators, not American investigators of illicit financing, not European economic experts — found it particularly surprising that gold appears to have joined bank notes in the skies over Afghanistan.

The addition of gold to the flight of cash from the country, the Afghan official said, only proves that “if it is a thing that has value and we can put it in our pocket, some of us are going to fly away with it.”