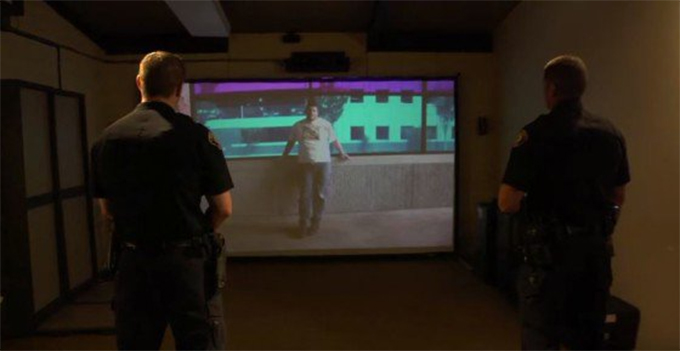 The goal of firearms training simulators for police is very simple. They recreate scenarios for police to help them refine tactics and commands, in hopes that they will not have to shoot a suspect. It also gives officers a realistic look at just how fast a mundane interaction with citizens can become a lethal force threat.

Officers responded to reports of an argument and possible domestic violence incident at an apartment complex.

When the door is opened, a half-dressed, attractive woman greets the officers. If the officers are drawn to her, uh, assets, they might pick up the movement in the background of her boyfriend stepping out onto the apartment deck and out of frame, but they might not pick up the AR-15 he picked up along the way.

Depending on how officers handle the scenario, (and the look the trainer wants to give them), the man may come back in guns blazing (splattering his girlfriend’s head all over the officers if they don’t take him down fast enough), or he might put the gun down and come out hands raised.

The Pasadena Police Department is one of many agencies who have adopted FATS to give their officers better training so that law enforcement officers and the civilians they encounter in high-stress situations can both have a better chance of survival.

This is good, solid training, but a pair of Guilford County, NC commissioners have voted against the acquisition of the FATS systems for the dumbest of all possible reasons.

It uses suspects of various races.

No, I’m not kidding.

The Guilford County Sheriff’s Office will use federal forfeiture funds to buy a firearms training simulator, despite lingering concerns from some officials over the racial implications of the device.

The Guilford County Board of Commissioners authorized the purchase 7-2 Thursday, with Commissioners Ray Trapp and Carlvena Foster dissenting.

The sheriff’s office will spend $51,850 on the firearms training simulator, or FATS, which will replace a defunct system from the 1980s, according to county documents.

The simulator comes with 700 pre-recorded training scenarios, and allows officers to train using the same weapons they handle on a daily basis. But the scenarios depict assailants of different ethnicities, which Trapp said seemed unnecessary.

“Do you have any idea why you’d have to identify ethnicity at all?” Trapp asked, noting that in many crime scenarios a perpetrator could realistically be wearing a mask or have his face obscured in another way. “Why wouldn’t that be more appropriate than being able to identify the person who’s coming in?”

Guilford county is roughly 65% white, 30% black, with other races making up the remaining five-percent of the population. Officers almost never encounter citizens wearing masks, except on those very rare occasions that officers stumble into a robbery in progress. That accounts for probably a few hundredths of one percent of all citizen contacts.

Apparently Ray Trapp and Carlvena Foster—both African-Americans—don’t think that deputies in Guilford County should be exposed to suspects of different races in their training.

I’d argue that this is political correctness run amok into overt racism.

Guilford County deputies are going to run into minorities on a very significant percentage of their contacts based upon demographics in the county. That’s simply reality. It’s not up for debate.

Almost none of them are going to be wearing masks.

Deputies should be afforded the most realistic training they can acquire, including cultural and linguistic nuances and cues that contribute to the overall demeanor of a suspect in a scenario. This can include facial cues in the real world.

Commissioners Ray Trapp and Carlvena Foster, you are an embarrassment to Guilford County, and to intelligent people everywhere who want officers to get the most realistic training they can, so that officers and the public have a better chance of going home at the end of the day.