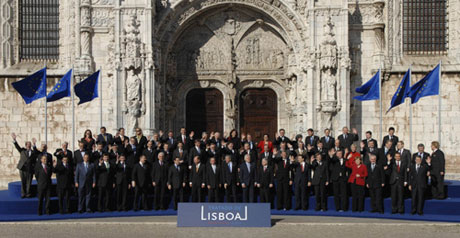 Leaders of the European Union countries pose for a group photo outside Lisbon's 16th century Jeronimos Monastery after signing the EU's Treaty of Lisbon Thursday, Dec. 13 2007

The Lisbon Treaty signed by European Union leaders on Thursday seeks to give the enlarged bloc a more efficient decision-making process and greater clout on the international scene.

The EU now has 27 members stretching from the Arctic Circle to the edge of Africa, but its rules were written when it had just six members (Treaty of Rome, 1957) and last updated when it had 15 members.

Officials have long said that the enlarged union needs a simpler, more efficient set of rules to improve its impact on global affairs.

They initially proposed an ambitious Constitutional Treaty which gave the EU many of the symbols of statehood, but that was rejected by Dutch and French voters in referenda held in 2005.

The Lisbon Treaty drops the constitution's references to symbolic issues such as the EU flag and the EU anthem, but it nevertheless preserves most of its key elements.

Currently, the committee of the EU's 27 prime ministers, the European Council, is chaired by each member in turn in a presidency that lasts six months.

The treaty replaces that system with a President of the Council, elected by national leaders, who remains in office for two and a half years and can be re-elected once.

It also updates the EU's executive body, the Commission, which draws up EU-level laws and makes sure that they are implemented. At present, every single EU member state nominates a commissioner, but the treaty reduces that number to 18.

It also streamlines the current system under which the EU is represented on the world stage by the presidency of the Council, the Council High Representative on Foreign Affairs, the President of the Commission and the External Affairs Commissioner.

The treaty merges the posts of External Affairs Commissioner and High Representative into a single foreign affairs chief, who chairs the meetings of member states' foreign ministers and serves as vice-president of the Commission.

On internal issues, the treaty reduces the areas in which single member states can veto union-wide proposals and establishes new rules for passing legislation in matters which do not require unanimity.

Under the treaty, such legislation must win the support of at least 55 per cent of member states and of 65 per cent of the EU's population.

However, the treaty includes a protocol which allows Britain and Poland to opt out of the Charter. Britain had expressed fears that the Charter could be used to override British labour law, while Poland feared that it could be used to boost gay rights.

The treaty will only come into force when - and if - all 27 member states have ratified it.

Officials say that they want the ratification to be complete by January 1, 2009, so that the new rules can apply to the appointment of a new Commission and European Parliament elections in that year.

After the failure of the Constitutional Treaty, member states have shied away from calling a referendum on the issue. Ireland is the only country constitutionally bound to hold one.

But Eurosceptics in several states, especially Britain, are calling for a referendum.

Even if the treaty does come into force in 2009, the new voting system will only be introduced in 2014. And in a concession to Poland, member states will be able to invoke the old system until 2017.