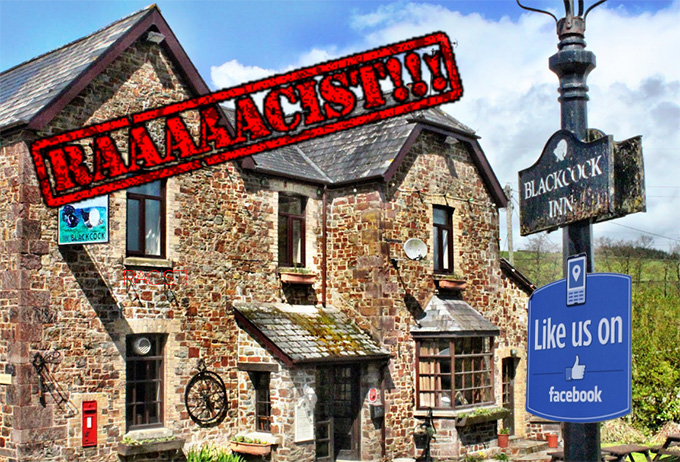 The establishment, which has traded in Llanfihangel Talyllyn under the name since 1840, didn’t have a particularly large reach on the social media site with approximately 450 friends, but that hasn’t stopped members of the terminally offended making claims of racism against the watering hole.

The pub’s manager, Lee Garrett, has been left bemused about the shut down of his page, which they used for advertising upcoming promotions and events to their mostly local clientele. “We had a personal Facebook page because we are in a small village in a rural area. We had 450 friends and those are mostly people who live here or within reaching distance and we used it to keep them updated about what we were doing,” he told the Daily Mail.

“In July I had this strange phone call from a woman who said she found our name offensive and her child had to cover their eyes to avoid seeing the name,” he continued. “Then days after I put our Christmas menu on Facebook I tried to log back in and had a notice come up on the screen saying my account was suspended because of racist or offensive language.”

Mr. Garrett has contacted Facebook regarding the ban but has so far not heard anything back from Facebook representatives. Not to be thwarted, the establishment has set up another page that has already gained more attention than the banned one.

Facebook’s continual pandering to the politically correct brigade has made repeated headlines in recent months. Just earlier in the month, a photographer called Hannah Hawkes found herself at the centre of a controversy after posting a client’s festive photograph. It depicted a man standing next to his wife and daughters who were gagged. The punchline? He was holding a sign saying “peace on Earth.” The resulting thousands of complaints prompted Facebook to remove the image under their harassment policy. The resulting furore even prompted a message from the executive director of National Coalition Against Domestic Violence, Ruth M. Glenn: in an interview with the Daily Dot, she said, “Unfortunately, we live in a culture that still perpetrates violence against women as evidenced by this photo.”

Meanwhile Facebook has so far allowed a feminist group dedicated to “naming and shaming” anyone who insults them online, despite such organized harassment being directly against their policies.