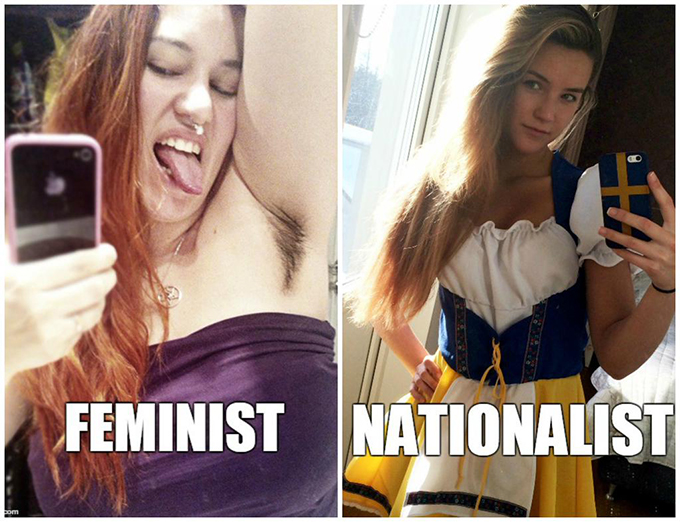 Editor's note: Naturally the UK security forces are concerned with anything on the right. This is the biggest enemy of the established current order. This is what they fear the most. It’s their globalism or our nationalism. Even basic traditional values and national sensibility is seen as “extremism.” That is due to the fact that the Overton window has been moved so far to the left in the last 50 years that a mere ethnic native Englishman or English woman, who want to preserve their own heritage, culture and people, are seen as terrorists and are more dangerous than those who are now raping and decapitating people on the streets of North western Europe.

It's interesting that the report mentions the re-launching of the British wing of Pegida as opposed to for example National Action or other groups that are more established and have a longer standing record of action and demonstrations. Many times these kinds of reports mention the organizations they either feel are manageable and benefit their cause or that in the extension are in some way managed and controlled by the government in one capacity or another. It’s about manageability and what organization you want discontent to funnel into.

As recently expressed in a very good video on this issue, is seem that Pegida UK, is more of a benefit than a danger. Please see this video on how Pegida UK actually promote the multicultural agenda, while appearing (to some) to oppose it.

Right-wing extremists pose a serious threat to UK security, says a new report on ‘lone-actor terrorism’ in Europe by the Royal United Services Institute (RUSI), Chatham House, the Institute for Strategic Dialogue and the University of Leiden.

The report states that individual attacks in the mold of Anders Breivik, whose far-right ideologies inspired his massacre of 77 people in the Norwegian capital Oslo and on the island of Utøya in 2011, are harder to detect and account for more fatalities than religiously motivated attacks.

Of the 124 terror perpetrators in Europe over the last 15 years, 33 percent were branded right-wing extremists compared to 38 percent who were religiously inspired.

The authors of the report were themselves surprised by the results.

“Given the intense public focus on religiously inspired terrorism, the finding that right-wing extremists account for a similar proportion of perpetrators within the database is particularly significant,” they said.

The report comes in light of a North West Infidels’ demonstration in Liverpool on February 27.

The right-wing group marched to “exercise our democratic rights to freedom of expression, speech, movement and assembly.”

However, the group sparked violence in the city center and daubed walls with Nazi-style propaganda.

The murder of British solider Lee Rigby in Woolwich in 2013 motivated a wave of far-right attacks in the UK. Researchers behind the report warned UK security forces that the re-launched British wing of Pegida may give “moral oxygen” to far-right extremists.

Almost half of right-wing attacks in Britain over the last three years are said to have been motivated by the murder of Rigby, with Islamic communities the target of far-right retaliation.

White supremacist Pavlo Lapshyn started his terror campaign in the summer of 2013, hoping to trigger a race war on the streets of Britain. He stabbed Mohammed Saleem, 82, as he walked back from his local mosque and continued to plant homemade explosives outside mosques in Tipton, Walsall and Wolverhampton.

The Metropolitan Police said anti-Muslim hate crimes increased 65 percent in London in 2014, a rise also thought to have been influenced by the Lee Rigby case.

Tell MAMA, an organization dealing with anti-Islamic hate crimes in the UK, said incidents soared in the month following the attack, from 22 cases per month to 109.

The authors of the report now warn the UK may face another wave of retaliation.

“In light of the refugee crisis currently unfolding across Europe, which has affected all European countries in one way or another, the threat of a resurgent and violent far-right attack has become intensified,” they said.

The problem that security forces face is the random nature of lone attackers, who tend to avoid security ‘trip wires.’ With public attentions firmly fixed on Islamic terror groups, resources are comparatively sparse when dealing with far-right loan terror plots.

Melanie Smith, one of the authors of the report, said: “It became clear that actually the vast majority were going to [be] looking for religiously inspired terrorists, which kind of made sense to us because that’s what we were expecting too.”