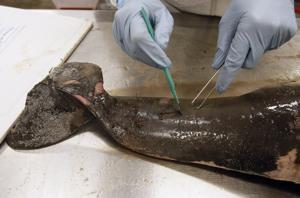 Last month dolphin corpses began washing up on the Gulf Coast in alarming numbers. Well, more dead dolphins continue to be found, bringing the total this year up to 114 -- 100 more than the average number of dead dolphins that washed ashore during the first three months of any year between 2002 and 2007.

So, naturally, there are quite a few people interested in what might cause such dramatic increases in marine mammal mortality. But Mississippi’s WLOX reported recently that government testing on the animals has been slow to commence, and Reuters reported over the weekend that a gag order has been put into place forbidding wildlife biologists at the National Marine Fisheries Service to talk to the media about their findings.

The gag order was contained in an agency letter informing outside scientists that its review of the dolphin die-off, classified as an "unusual mortality event (UME)," had been folded into a federal criminal investigation launched last summer into the oil spill.

"Because of the seriousness of the legal case, no data or findings may be released, presented or discussed outside the UME investigative team without prior approval," the letter, obtained by Reuters, stated.

One veteran biologist-- speaking on the condition on anonymity -- told the news agency that fellow government scientists are "confused" and "angry" about the order because it leaves outside "marine experts out of the loop completely" and it "throws accountability right out the window."

Meanwhile, Gulf Coast residents already convinced that their government is either lying to them about the situation in the Gulf or doing everything in its power to suppress bad news (or both) aren’t likely to find such reports reassuring.

"The government’s full of more crap than a bathroom at a Taco Bell," one Louisiana fisherman told this reporter over the weekend. "Anybody down here with a lick of sense knows that." 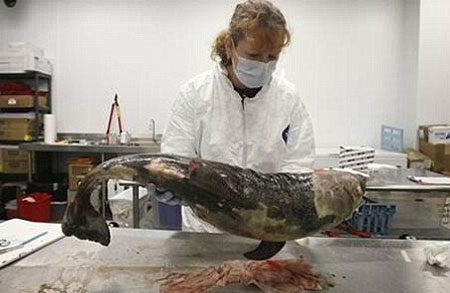 Results from an examination of those remains, conducted as part of the government’s oil spill damage assessment, have not been released, though scientists concluded those dolphins “died from something environmental during the last year,” Mase said. Source 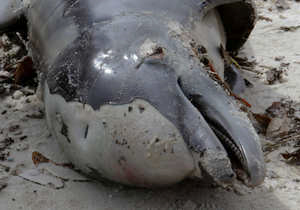