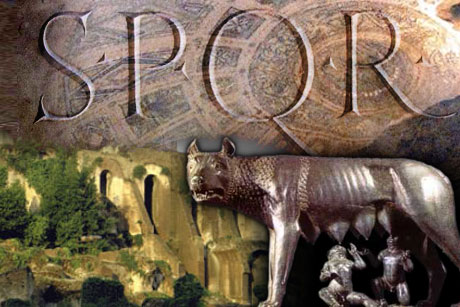 A recently discovered pagan shrine dedicated to Rome's legendary founder Romulus and his brother Remus is being linked by a scholar to the first celebration of Christmas held on the date that still marks the festivity today.

Last month Italian archaeologists unveiled an underground grotto which they believe ancient Romans worshipped as the place where a wolf nursed the legendary twins.

Now, a top Italian scholar says that because of that shrine, 4th century Emperor Constantine chose the site to build the church where Christmas was first marked on Dec. 25. The choice was part of efforts in the early days of Christianity to link pagan practices to Christian celebrations.

"This is very probably the church where the first Christmas was celebrated," Andrea Carandini, a professor of archaeology at Rome's La Sapienza University, told reporters Friday. "Now we know why."

Carandini said while it was known among scholars that the first Christmas service was held at the Basilica of St. Anastasia, it was not known that the grotto of Romulus and Remus — the "Lupercale" — was possibly so close.

The discovery helps explain the transition from paganism to Christianity, scholars said.

"The church was built to christianize these pagan places of worship," Carandini said. "It was normal to put a church near these places to try to 'save' them."

Rome's archaeological superintendent Angelo Bottini, who did not take part in the research, said Carandini's hypothesis was "evocative and coherent" and "helps us understand the mechanisms of the passage from paganism to Christianity."

Bottini and Carandini both said future digs would be able to prove the link between the shrine and the church if structures belonging to the "Lupercale" were found directly below the basilica.

The Basilica St. Anastasia was the first church to rise not on the ancient city's outskirts, but on the Palatine Hill, the palatial center of power and religion in imperial Rome, Carandini said. Though little known today, at the time of Constantine it was one of the most important basilicas for Christians in Rome, he said.

Constantine, who ended the frequent waves of anti-Christian persecutions in the Roman empire by making Christianity a lawful religion in 313, played a key role in unifying the beliefs and practices of the early followers of Jesus.

In one defining moment, he presided over the Council of Nicaea in 325, which among other things homogenized the dates of important Christian festivals. The council opted to mark Christmas, at that point celebrated at different dates throughout Christianity, on Dec. 25 to coincide with the Roman festival celebrating the birth of the sun god, Carandini said.

Sometime after the council, St. Anastasia was built on the Palatine, possibly as early as 326, Carandini said.

The "Lupercale" shrine — named after the "lupa," Latin for she-wolf — is buried 16 meters (52 feet) underground. So far archaeologists have only been able to see it by inserting probes and cameras that have revealed a vaulted ceiling decorated with colored marble and a white imperial eagle.

Though some experts have expressed doubts on the identification of the "Lupercale," most archaeologists believe the shrine fits the descriptions found in ancient texts, and plans are being drawn up to excavate the structure further.