“I hope Hurricane Florence washes away all the racists”

Racist leftists on Twitter are salivating at the prospect of white people and Trump supporters being killed by Hurricane Florence.

With the monster storm closing in on the Carolinas, putting 10 million people in the crosshairs, many Twitter users couldn’t pass up the opportunity to politicize the weather.

“Hurricane Florence do your job by sweeping up all racists and trump supporters,” wrote one.

“I hope Hurricane Florence blows/washes away all the racists and bigots in the Carolinas this week,” added another.

Wesley Chu, who is verified by Twitter, wrote, “The one good thing about Hurricane Florence is that it’s going to hit an area full of white people. I’m sure FEMA will get right to work on restoring power and rebuilding the area.” 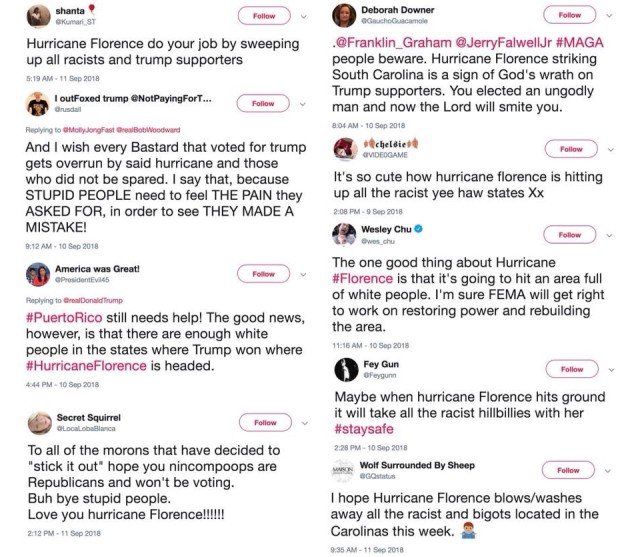 “Hurricane Florence striking South Carolina is a sign of God’s wrath on Trump supporters,” wrote Deborah Downer, adding, “You elected an ungodly man and now the Lord will smite you.”

“I wish every bastard that voted for trump gets overrun by said hurricane and those who did not be spared,” said another man.

These individuals don’t seem to grasp that over 3 million people in the Carolinas voted for Hillary Clinton and that hurricanes don’t discriminate based on political preference.

Others seemed more concerned about why hurricanes were being given ‘white people names’, suggesting that was racist (while being racist against white people).

they naming these hurricanes white people names because they ruin everything

Y'all keep naming these tropical storms white people names. Where is Tropical Depression Nguyen??? or Hurricane Hong? I got QUESTIONS https://t.co/KXcqiiXtpk