"The Olympics is a great brand." So says David Higgins, Chief Executive of the Olympic Delivery Authority. One of the words Higgins would not like attached to his brand is – rubbish. Yet rubbish features large in relation to the London Olympics. The Main Stadium, Basketball Arena, Velodrome, and the Media Centre are all built on rubbish, or to be more exact former rubbish dumps. Most of this rubbish (with associated contamination) remains under these venues. 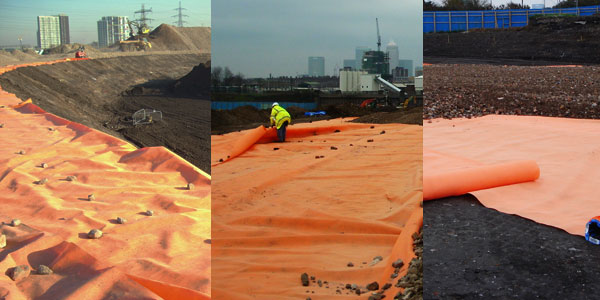 The Giant Cover-up: the Warning Marker Layer covers up to a million square meters of contaminated ground on the Olympic Site

Documents submitted for planning approval reveal that the ground below the Media Centre is still producing so much methane from the decaying refuse it contains that special precautions should have been taken to protect the expected 20,000 visiting journalists and media. 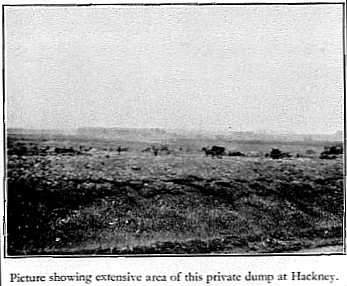 Rubbish Foundations: historic photograph (c1930) of the rubbish dump that remains below the Media Centre
Two documents (excerpt from one shown below) warned of buried radioactive waste near the site of the Basketball Arena and Velodrome, close to the Athletes’ Village - yet the authorities ignored the possibility of widespread contamination until radioactivity was found in excavated material some months after works began.

From contract for construction of Eastway Cycle Circuit 1974. Extensive dumping of radioactive waste across the site was never considered in remediation plans.
Then at the site of the Main Stadium, significant quantities of radioactive contamination were unknowingly excavated and spread around other areas of the site. Documents also acknowledge that further contamination remains buried beneath the stadium.

In a bid to prevent a rubbishing of the Olympic brand London 2012 bosses have been at pains to play down the issue of the radiation hazard and its poor management. For example, in February of 2008 when radioactive waste had been inadvertently excavated, a PR distraction strategy was hatched with all the parties involved, which included the claim:

"Highly-sensitive monitoring has been carried out on the site during the earthworks programme and this has detected a small amount of low level radiological finds in the soil in the area. This soil, with mild radioactive properties present due to the past industrial activity over the last 100 years or so, is being managed so that it presents no risk to public or workers."

In fact, excavations at the Main Stadium site were virtually completed before any radiation monitoring or protection measures were introduced - despite its history as a high-risk unregulated private landfill. When radiation was detected in the excavations in November 2007, no action was taken, and it was not made public. Only in February 2008 were the relevant authorities alerted and remedial and protective measures started. Meanwhile a delegation from Beijing visited the location - where far from ’mild radioactive properties’, detection equipment was registering off-scale readings. Since surveying first started on the site, mysteriously high levels of background radiation had been consistently recorded.

The ODA claim that "Health and safety of the workforce and local people is our number one priority." Yet the failure to carry out a detailed and comprehensive radiological investigation prior to starting earthworks would suggest otherwise.

"It has become clear that the real priority is the avoidance of negative PR and of any delays to the delivery schedule - and the less that was known the better. The ostrich-like approach led to real injustice and left the workforce and local population vulnerable." 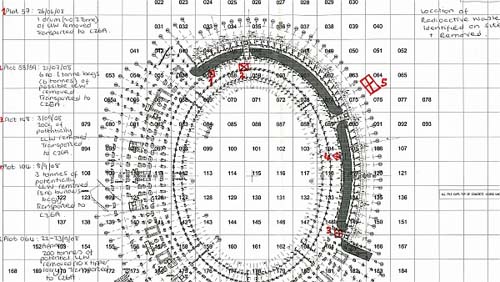 X marks the spots - handwritten annotations show locations of hotspots of radioactive material, still present up to 4 months after the ’early start’ on the stadium construction. ’LLW’ refers to waste requiring regulatory control and offsite disposal to the national LLW Repository. Click to enlarge.

Olympic spin-doctors are also keen to play down the fact that more than 7,000 tonnes of radioactively contaminated material has now been reburied on the Olympic site. The potential for bad publicity makes the reburial of this material a surprising choice. Paul Charman comments

"Taking this PR risk looks to have been unavoidable . The waste includes material that could not be disposed of to any landfill in the country and may well have been refused even at the specialist radioactive waste repository at Drigg. The conditions for acceptance at Drigg would also have meant external scrutiny - which could have been highly damaging. Reburying it on site looks like a gamble they had to take."

The Olympic radioactive waste dump is just to the north of the Main Stadium - a top athlete could cover the distance in 25 seconds. Note proximity to waterways

There are a number of irregularities about the on-site burial of radioactive contamination. The authorities appear to have colluded to place the problem outside regulatory control. They did this by claiming higher activity material was to be mixed with lower activity material, thus reducing its average radioactivity to below the legal threshold - a process of dilution. The Environment Agency prohibits this type of dilution for the purpose of avoiding regulation. Furthermore documents show that when the burial actually took place there was no physical mixing of contaminants, rather they were simply placed one on top of the other in a hole in the ground. Surprisingly this was approved by the Environment Agency - who subsequently claimed to have deleted the relevant records.

"Mixing the radioactive wastes with lots of non or low radioactively contaminated soils etc scraped from around the Olympic site is nothing more that sharp practice - it defies national government policy that radioactive wastes should be concentrated and contained and not, as is the case here, diluted and dispersed."

Before and after London won the Olympic bid officials were telling us that the Games provided an ’unprecedented opportunity’ to clean up this highly contaminated area of East London. In reality what has been done is to leave unknown quantities of contamination in the ground and then to cover the majority of the 200 hectare site with a warning sheet of orange plastic. On top of this has been placed a ’separation layer’ of supposedly clean material. As a consequence, any future excavation work will require special precautions, and any excavated material is to be ’treated as contaminated unless proven otherwise’.

With regard to the legacy use of the Olympic site, John Large notes:

"After all of the Olympic razmatazz has passed this very long-lived radioactive waste will remain, it will require management and safeguarding for tens, hundreds and more years, and its presence will blight the use and future development of the Olympic site."

The spectacular effort made by Olympic spin-doctors to divert our attention from these details looks very similar to the orange plastic sheet: a gigantic cover-up of rubbish. The Olympic zone remains officially classified as a brownfield site. Potential bidders for the Media Centre, for which expressions of interest are currently being sought, should heed the small print:

"Contaminants are likely to be present in many forms, for example, solid, gaseous, liquid as well as deleterious forms (asbestos) and therefore future works should take into account this possibility. Remnant ground conditions may be hazardous in nature..."

Note: All information in this article is taken from documentary evidence.

Article from: gamesmonitor.org.uk
To get more information and updates on the ongoing preparations for the London 2012 Olympics and watchdog articles, visit GamesMonitor.org.uk.

London 2012: Radioactive Waste? No problem, we’ve got a plastic sheet...