Dec 20, 2011 Source: io9.com
This is as fascinating as it is unsettling. Scientists at the Department of Energy’s Savannah River Site — a nuclear reservation in South Carolina — have identified a strange, cob-web like "growth" (their word, not ours) on the racks of the facility’s spent nuclear fuel assemblies. 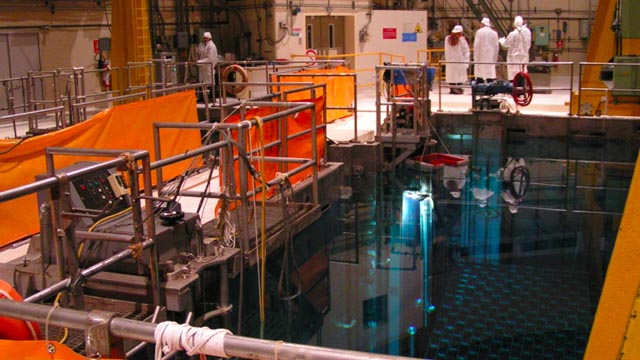 According to a report filed by the Defense Nuclear Facilities Safety Board, "the growth, which resembles a spider web, has yet to be characterized, but may be biological in nature."
The Augusta Chronicle reported today that the "white, string-like" material was discovered amidst thousands of the spent fuel assemblies, which are submerged in deep nuclear storage pools within SRS’s L Area Complex. (The image up top is of a similar nuclear storage pool at Italy’s Caorso Nuclear Power Plant, which was decommissioned in 1990.)

The safety board’s report claimed that the initial sample of the growth was too small to characterize, and that "further evaluation still needs to be completed."

We’ve already tried getting in touch with both the Savannah River Site as well as the Defense Nuclear Facilities Safety Board, but so far have been unable to speak with anybody to ask additional questions about the growth and where it’s occurring specifically.

Could we be dealing with an unknown species of extremophile?