Dec 18, 2007 Source: collectspace.com
Move over Eagle, the Altair has landed.

NASA today introduced a new name and logo for its next generation lunar lander, which was previously referred to as the Lunar Surface Access Module, or LSAM for short.

"That's the name they chose," said Jeff Hanley, NASA's Constellation Program manager, under which Altair falls. "We can stop calling it LSAM or esoteric things like that."

Hanley revealed the new name at a meeting with industry representatives held at Johnson Space Center to provide a general background to the lunar lander preceding NASA soliciting ideas for its development from contractors.

Sparked by a star, motivated by a mission
"Altair is the brightest star in the constellation Aquila and is the twelfth brightest star in the night sky," wrote Lauri Hansen, NASA's Altair project manager, in an e-mail sent to Hanley this morning, a copy of which was obtained by collectSPACE.com. "The word 'Altair' finds its origins in Arabic and is derived from a phrase that means 'the flying one'," she continued.

"In Latin, 'Aquila' means Eagle, tying our new lander to the historic Apollo 11 Eagle," concluded Hansen, referring to the vehicle that brought mankind's first two men to the lunar surface in July 1969.

The Apollo 11 mission (left) and Altair project (right) logos.
The Altair project logo emphasizes that connection, using the major design element from the Apollo 11 patch as its own. Both emblems depict a bald eagle clasping an olive branch in its talons, an image chosen by Michael Collins, Apollo 11's command module pilot, based on a photo in a 1965 book published by National Geographic.

"We needed something simpler, yet something which unmistakably said peaceful lunar landing by the United States," Collins wrote in his 1974 book, "Carrying the Fire". "Jim Lovell, Neil [Armstrong's] backup, introduced an American eagle into the conversation. Of course! What better symbol -- eagles landed, didn't they? At home I skimmed through my library and finally found what I wanted in a National Geographic book on birds: a bald eagle, landing gear extended, wings partially folded, coming in for a landing. I traced it on a piece of tissue paper and sketched in an oblique view of a pockmarked lunar surface," wrote Collins.

The Altair version of Collins' eagle greatly simplifies the detail of the Apollo artwork and reverses the direction that the bird is landing on the lunar surface.

The newer logo also spells out the name "Altair" in a font that is reminiscent of how "Apollo" appears on its project emblem.

NASA's four logos associated with its effort to return astronauts to the Moon: Constellation, Ares, Orion and Altair.
The Altair logo is triangular in shape, continuing a theme that is present in the emblems for its parent program and sibling projects.

Under NASA's Constellation program, Orion crew vehicles and Altair lunar landers will launch to Earth orbit on Ares I and Ares V rockets respectively. Like the patches for the other initiatives, the Altair insignia includes 10 stars in its background, a symbol previously attributed to each of the 10 NASA nationwide centers working to return astronauts to the Moon.

As currently envisioned by NASA, Altair landers will bring four astronauts at a time to the lunar surface, as well as supplies and equipment to establish an outpost. An initial return to the Moon is targeted to launch before year 2020.

The Constellation program rose as a result of the Vision for Space Exploration proposed by President George W. Bush in January 2004, after the loss of shuttle Columbia eleven months earlier.

In June 2006, NASA revealed the name and logo for its new launch vehicles, Ares I and V. Less than a month later, collectSPACE.com was the first to report the title and emblem given to the crew exploration vehicle Orion, as was confirmed by NASA in August 2006.

NASA previously applied "Altair" as an internal-use only "notional" title for the Orion crew vehicle. The agency has also used the name for a high-altitude unmanned aerial vehicle (UAV).

All four insignias, including the Constellation and Altair logos, were designed for NASA by Michael Okuda, who may be best known for his work on the Star Trek series. 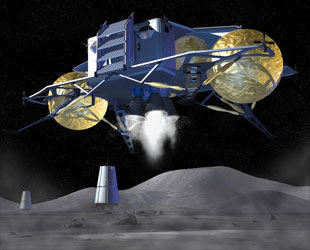 An artist's concept of Altair landing on the Moon. (Image: NASA)