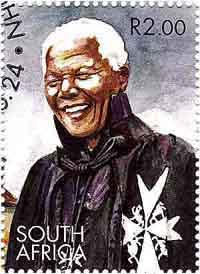 In celebration of the 900th anniversary of the Order of St John, the South African Post Office issued a special miniature sheet and an official commemorative cover on 23 June 1999. The miniature sheet has a R2 face value and features President Nelson Mandela, who is a Knight of Grace of the Order, wearing the mantle of the Order. It also depicts Glenshiel, a stately mansion which has been the National Headquarters of the Order in South Africa since 1950. Situated in the suburb of Westcliff in Johannesburg, Glenshiel is lent to the Order in perpetuity by the Haggie Trust, established by Major Gordon Haggie.

The Order of St John in England was centred around the Priory of Clerkenwell in London in the 12th Century and reached its zenith of power and influence at the beginning of the 16th Century. The dissolution of the monasteries put an end to the Order in England for nearly 300 years, but it was revived in 1831 and was active in attending to the sick and wounded in the Franco-Prussian War of 1870. The order was granted a Charter by Queen Victoria in 1888.

Her Royal Highness Queen Elizabeth II is its Sovereign Head. The Grand Prior, currently the Duke of Gloucester, is always a member of the Royal Family. Today there are 20 000 members of the Order worldwide. Membership is granted under the crown to those who strive to fulfil the Order’s ideals. 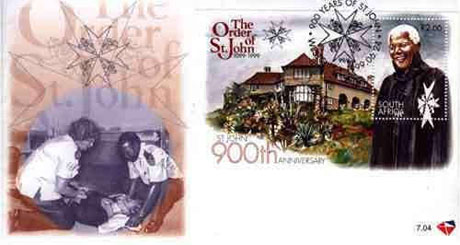 Watercolour Painting of St John Ambulance Brigade Members attending to a patient at a Duran-Duran concert; "Glenshiel", headquarters of the Order of St John in South Africa; President Nelson Mandela, wearing his Knight of Grace mantle.

In South Africa the first mention of the work of the Order comes from Grahamstown in 1883. In the absence of accurate records, it has been decided that two first aid and home nursing classes held there should be regarded as the beginnings of the St John Ambulance Foundation in this country. There are now branches of the Foundation in most large centres in South Africa. Today the work of St John has expanded from first aid training, to home care of patients with AIDS and the establishment of eye clinics.

A limited edition print of 2 000 first day covers have been issued by the Post Office bearing the date 24th June. This particular date is of great significance to the Order of St John as it is traditionally recognised as ’St John the Baptist Day’, the patron saint after whom the international non profit organisation takes its name.