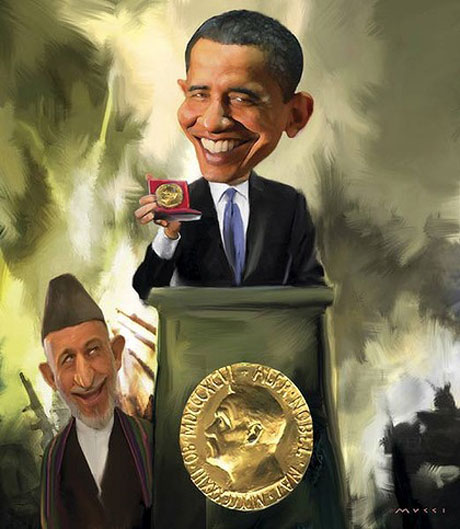 Long before the Nobel Peace Prize was debased and trivialised into an episode of American Idol, the failure beneath the soaring rhetoric of Barack Obama had been exposed. Even the secretary of the Nobel committee sheepishly admitted on Friday: ''Nominations for the 2009 Nobel Peace Prize closed just 11 days after he [Obama] took office.''

Since then, the US President has knowingly propped up a corrupt and violent regime in Afghanistan led by a lying fraud. He has achieved nothing to prevent the continued building of Israeli settlements on the Palestinian West Bank. To hand the Nobel prize to someone whose credentials are in the potential rather than the execution confirms that the prize has degenerated into a beauty pageant.

Three times in the past eight years the starry-eyed progressives who run the prize have given it to leaders of the US Democratic Party - Jimmy Carter, Al Gore and now Obama. One of them, Carter, actively sowed the seeds of what would become a global jihad.

Why is it that US governments continue to support corrupt, violent and dysfunctional regimes? The Obama Administration has locked straight into this pattern. Young American soldiers are again being asked to fight and die for a duplicitous foreign leader. You can throw in Kevin Rudd, who has committed Australian troops to fight in the pointless cause of preserving the Afghan President, Hamid Karzai, and his warlord allies.

A flaming arrow through the front door of this pretence arrived on September 28, courtesy of George Packer, of The New Yorker, who accompanied the US special envoy to Afghanistan, Richard Holbrooke, on a recent trip to Afghanistan. Packer's reporting, with its high-level access, made a mockery of the charade of democracy in Afghanistan.

''Every time an Afghan encountered the government, he was hurt by it - abused, asked for a bribe, hauled off to jail without evidence,'' Packer wrote. Worse, he came to believe the Karzai regime was not even interested in providing services to the people, let alone that it could do so.

He was also present at a meeting between Holbrooke and Karzai, and his portrait is disturbing: ''[Holbrooke:] 'Wherever our troops have driven out the Taliban in Helmand over the last few weeks, there has been no effort to bring in administrative structures of your government.'

'''Has this been done in co-ordination with our government?' Karzai asked, chewing nervously, his eyes shifting everywhere except to Holbrooke's face.''

Packer concluded: ''The election of August 20th was a disaster that could change the course of the war. The evidence of fraud was so overwhelming that it threatens to render the entire vote illegitimate … Holbrooke must know that there will be no American victory in this war; he can only try to forestall potential disaster.''

Within days of this public assessment the former United Nations official responsible for elections in Afghanistan, Peter Galbraith, exposed the lying that went all the way to the UN Secretary-General, Ban Ki-moon. Writing in The Washington Post eight days ago, Galbraith said: ''Afghanistan's presidential election, held August 20, should have been a milestone in the country's transition from 30 years of war to stability and democracy. Instead, it was just the opposite. As many as 30 per cent of Karzai's votes were fraudulent, and lesser fraud was committed on behalf of other candidates … The fraud has handed the Taliban its greatest strategic victory in eight years of fighting the United States and its Afghan partners … I was ordered not to pursue the issue of fraud …''

As the disastrous truth continued to seep out, despite the efforts of the UN and the silence of the Obama Administration, more details of fraud were made public last week. All of this was consistent with a warning delivered in Sydney this year by the bravest woman in Afghanistan, Malalai Joya.

She had set up an orphanage and a health centre before becoming the youngest person elected to the Afghan parliament. But in 2006, after describing the parliament as a sanctuary for ''warlords and theocrats'' and a ''zoo'' she was thrown out of office, threatened with death, abandoned by the government, and has survived two assassination attempts.

''Your government is supporting a corrupt, mafia-ridden, criminal state,'' she told me in June.

''The warlords are the sworn enemies of democracy, women's rights and justice. The Australian troops are really guarding US strategic and military interests, not the Afghan people … We are living under jungle law.''

She predicted a corrupt election and was proved right, while Washington and Canberra remain silent and complicit. All of which makes a mockery of the Nobel award citation on Friday: ''The Norwegian Nobel Committee has decided that the Nobel Peace Prize for 2009 is to be awarded to President Barack Obama for his extraordinary efforts to strengthen international diplomacy and co-operation between peoples …

''Obama has as president created a new climate in international politics. Multilateral diplomacy has regained a central position, with emphasis on the role that the United Nations and other international institutions can play. Dialogue and negotiations are preferred as instruments for resolving even the most difficult international conflicts … Only very rarely has a person to the same extent as Obama captured the world's attention and given its people hope for a better future.''

None of us would hope for anything else.

The person most responsible for the Nobel committee's sycophancy is the chairman of the five-member committee, Thorbjoern Jagland, 58, a former prime minister of Norway with a long history of left-wing politics. Now he can meet his political hero. The juxtaposition of white-tie glamour and real-world squalor surpasses irony.