Dec 19, 2010 Source: news.yahoo.com
A Pakistani man who says he lost his son and brother in an American missile attack in the northwest threatened Monday to sue the CIA unless he receives compensation, a move that will draw attention to civilian casualties in such strikes.

Kareem Khan and his lawyers said they were seeking $500 million in two weeks or they would sue CIA director Leon Panetta, U.S. Defense Secretary Robert Gates and a man they said was the CIA’s station chief in Islamabad for "wrongful death" in a Pakistani court. 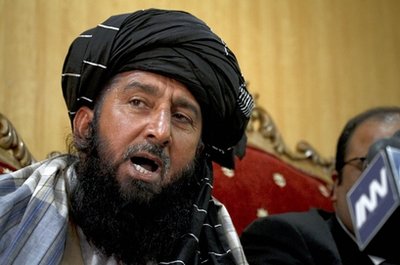 Kareem Khan, Pakistani tribesman from North Wazirstan, talks to the media in Islamabad, Pakistan, on Monday, Nov. 29, 2010. (AP Photo/Anjum Naveed)
The United States does not publicly admit to firing missiles into northwest Pakistan close to the Afghan border, much less say who they are targeting or whether civilians are also being killed. Privately, officials say they are taking out al-Qaida and Taliban militants and dispute accounts that innocents often die.

Pakistani officials, who face criticism from their own people for allowing the attacks, rarely discuss them.

Khan said his 18-year-old son, Zaenullah Khan and his brother Asif Iqbal were killed on Dec. 31 last year in the town of Mir Ali in North Waziristan. The third victim was a mason who was staying at the house, he said. Khan said his son and Iqbal were teachers.

"The people who were martyred were innocent," Khan told a media conference in Islamabad alongside his lawyer, Mirza Shahzad Akbar. "They did not have links with any terrorist group, nor they were wanted."

The Associated Press and other media organizations reported that three people were killed on Dec. 31 in a missile attack in Mir Ali. Pakistani intelligence officials said then that the men were militants, but offered no proof.

Khan, who was working as a journalist, was in Islamabad at the time of the attack.

Any legal action stands no chance of success unless U.S. officials cooperate with the court, something highly unlikely given the secretive nature of the missile strike program. The most Khan and Akbar can hope for is to bring attention to the issue.

There have been more than 100 such attacks this year, more than twice than in 2009. The attacks began in 2005, but picked up pace in 2007 and have increased ever since. The border region is out of bounds for non-locals and much of it is under the control of militants, meaning independent reporting on who is being killed is nearly impossible.

Most of the missiles are believed to be fired from unmanned planes launched from Afghanistan or from secret bases in Pakistan.

Human rights groups have called on the United States to provide greater transparency about who is being targeted and publicly investigate allegations of civilian deaths. Without knowing, they say it is impossible to judge whether such attacks are legal.

Across the border in Afghanistan, the American military compensates the families of innocents killed once it carries out an investigation.