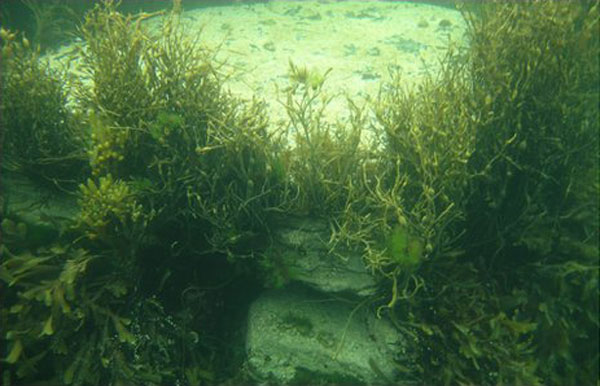 A unique discovery of submerged man-made structures on the seabed off Orkney could help find solutions to rising sea levels, experts have said.

They said the well preserved stone pieces near the island of Damsay are the only such examples around the UK.

It is thought some of the structures may date back thousands of years.

Geomorphologist Sue Dawson said that people have survived and adapted in the past and it is that adaption to climate change that needs to be learned from.

One of the team, archaeologist Caroline Wickham-Jones, of the University of Aberdeen, said of their freezing investigations under the December seas off Orkney: "We have certainly got a lot of stonework. There are some quite interesting things. You can see voids or entrances.

"There's this one feature that is like a stone table - you've got a large slab about a metre and a half long and it's sitting up on four pillars or walls so the next thing we need to do is to get plans and more photographs to try and assess and look for patterns.

"The quality and condition of some of the stonework is remarkable. Nothing like this has ever been found on the seabed around the UK."

Geophysicist Richard Bates, from the Scottish Oceans Institute, said: "We've got other sites down on the south coast of England where we have got submerged landscapes, meso-neolithic landscapes as we have here but what we haven't got anywhere else is actual structures.

"I don't say that's unique - that we'll never find that anywhere else, but so far we haven't seen such things before."

In general Scotland's mainland has been getting higher - but the surrounding islands have been sinking.

Sue Dawson, a geomorphologist from the University of Dundee, has been studying how and why the coast line is constantly changing.

She said: "One of the key premises behind a lot of the study of the past is that the past is a key to the present and the future.

"So we can look to times when maybe environmental changes have been much more rapid and much more catastrophic in some instances and people have survived and adapted and it's that adaption to climate change is one of the key things that we need to get to grips with."

The experts said the seabed around Orkney may be littered with man-made structures.

Richard Bates added: "We can look at the terrestrial landscape around here and see how man's occupied that.

"Pretty much anywhere in Orkney you can see a vista which has part of man within it, ancient man in the environment.

"The similar case is going to be in this drowned landscape so the few places we have seen so far are the biggest features but we expect to see much more as we dissect that landscape in finer and finer detail."

And they believe that while looking at an uncertain future it may pay to look into the past.

Caroline Wickham-Jones said: "The really interesting thing about this bay is the stories relating to things under the sea and sea-level change. Our ancestors were dealing with similar problems to ourselves and we'd like to see how they coped with it."