Sicilian mayor: "We are witnessing a genocide caused by European selfishness" 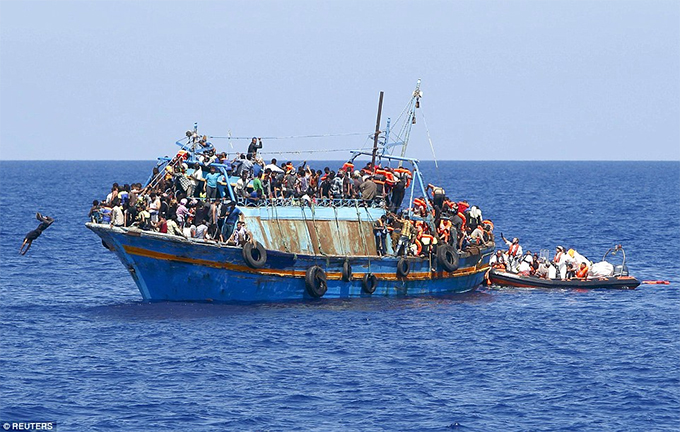 An Italian mayor has blasted European leaders for failing to prevent a string of migrant disasters in the Mediterranean.

'We are witnessing a genocide caused by European selfishness,' said Leoluca Orlando, the Mayor of Palermo which lies on the brink of the migrant crisis.

200 asylum seekers are feared to have drowned when a rickety fishing boat carrying 700 capsized 25 miles off the coast of Libya on Wednesday.

Just one day later, hundreds of migrants needed to be rescued from an over crowded smugglers' boat in the Mediterranean.

Orlando has since pleaded with European countries to allow more refugees to settle on their land.

On Wednesday, a boat containing mainly Syrian refugees flipped after the desperate passengers saw an Irish navy ship approaching and surged to one side.

The Irish ship, which rescued 370 surviviors, is part of the European Union Triton mission, which was expanded after the drowning of 800 migrants earlier this year.

The Italian coast guard confirmed that 25 bodies were recovered but many more are expected to have perished in the latest human smuggling tragedy.

Just one day later, a male refugee was seen diving from the bow of another ship as scores more - including women, children and babies - were provided with life-jackets and rescued by aid workers operating just over 10 miles from the Libyan coast.

The passengers, many of whom are suspected of being trafficking victims from war zones in African and the Middle East, were rescued without incident by the Migrant Offshore Aid Station and aid agency Medecins sans Frontiere.

Yesterday, the UN said that some 224,000 migrants and refugees had crossed the Mediterranean to Europe so far this year.

'What we have at Europe's doorstep is a refugee crisis,' UN refugee agency spokesman William Spindler said.

Crisis: Following the successful rescue of hundreds of migrants off the coast of Libya today, a UN refugee agency spokesman said: 'What we have at Europe's doorstep is a refugee crisis'

He said that by the end of July, around 224,000 refugees and migrants had arrived in Europe by sea.

Nearly all of the people crossing the Mediterranean during the first seven months of the year, often in rickety boats and at the mercy of human traffickers, have landed in Greece (124,000) and in Italy (98,000), he said.

During that period, far from everyone has made it to shore, with more than 2,100 people drowning or going missing, Spindler said.

A distraught woman from the boat which capsized yesterday has been searching for her three children who went missing during the journey.

Police officials said she was taken to view bodies and came out weeping, although it was not clear whether she had seen her family.

Police said they had detained five men suspected of piloting the boat that overturned yesterday, as well as generally trafficking migrants.

Vessels from the Italian and Irish navies and humanitarian agency Medecins Sans Frontieres (MSF) saved about 400 people from the fishing boat, thought to have been carrying up to 600 people, mostly Syrians fleeing their country's civil war.

They found no more survivors after scouring the waters overnight. Italian vessels continued to search the area on Thursday, a coastguard spokesman said.