Time travellers from the future 'could be here in weeks' 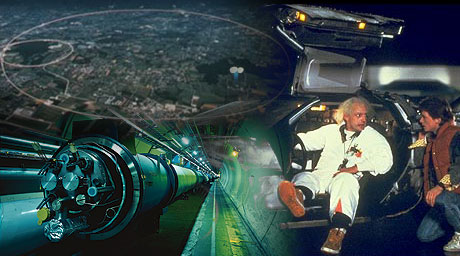 The first time travellers from the future could materialise on Earth within a few weeks.

Physicists around the world are excitedly awaiting the start up of the £4.65 billion Large Hadron Collider, LHC - the most powerful atom-smasher ever built - which is supposed to shed new light on the particles and forces at work in the cosmos and reproduce conditions that date to near the Big Bang of creation.

Prof Irina Aref'eva and Dr Igor Volovich, mathematical physicists at the Steklov Mathematical Institute in Moscow believe that the vast experiment at CERN, the European particle physics centre near Geneva in Switzerland, may turn out to be the world's first time machine, reports New Scientist.

The debut in early summer could provide a landmark because travelling into the past is only possible - if it is possible at all - as far back as the point of creation of the first time machine.

That means 2008 could become "Year Zero" for temporal travel, they argue.

Time travel was born when Albert Einstein's colleague, Kurt Gödel, used Einstein's theory of relativity to show that travel into the past was possible.

Ever since he unveiled this idea in 1949, eminent physicists have argued against time travel because it undermines ideas of cause and effect to create paradoxes: a time traveller could go back to kill his grandfather so that he is never born in the first place.

But, sixty years later, there is still no fundamental reason why time travellers cannot put historians out of business.

But the Russians argue that when the energies of the LHC are concentrated into a subatomic particle - a trillionth the size of a mosquito - they can do strange things to the fabric of the universe, which is a blend of space and time that scientists called spacetime.

While Earth's gravity produces gentle distortions in spacetime the LHC energy can distort time so much that it loops back on itself. These loops are known to physicists as "closed timelike curves" and they ought, at least in theory, to allow us to revisit some past moment.

The scheme chimes with one laid out in 1988, when Prof Kip Thorne and colleagues at the California Institute of Technology, Pasadena, showed that wormholes, or tunnels through spacetime, would allow time travel, a scheme popularised by Carl Sagan in his novel - made into a film - Contact.

Prof Aref'eva and Dr Volovich believe the LHC could create wormholes and so allow a form of time travel. "We realised that closed timelike curves and wormholes could also be a result of collisions of particles," Prof Aref'eva says.

There are still plenty of obstacles for the likes of Dr Who, however. Not least of them is the fact that these are mini wormholes, so only subatomic particles are small enough to travel through them.

They tell The Daily Telegraph that whether subatomic time travel in the LHC would open the doors for human scale time travellers "is a deep and interesting question" but stress that "these problems, and many others as well, require further investigations."

Probably the best we can hope for is that the LHC may show a signature of the wormholes' existence, Dr Volovich says. If some of the energy from collisions in the LHC goes missing, it could be because the collisions created particles that have travelled into a wormhole and through time.

One sticking point until now for wormhole concepts is finding an exotic kind of material capable of keeping the maw of the wormhole open for time travel.

Dark energy - a mysterious antigravity force that is thought to pervade the universe - could, they say, be just what is needed to keep the entrance to a wormhole open, at least according to one family of ideas about its nature, where it is called phantom energy.

If a blend of colliding particles and phantom energy does create a wormhole in Geneva this year, an advanced civilisation could find it in their history books, pinpoint the moment, and take advantage of their technology to pay us a visit.

"The observational evidence still allows for phantom energy," says Robert Caldwell, a physicist at Dartmouth College in Hanover, New Hampshire. "As for Aref'eva and Volovich's speculation that the LHC will produce the stuff of time machines - ugh!"

A leading scientist who believes that time travel may be possible, Prof David Deutsch of Oxford University, comments: "It's speculative in the extreme, but not cranky. For various reasons I don't think the mechanism they propose would work (i.e. provide a pathway for messages from the future) even if their speculations are true."

Dr Brian Cox of the University of Manchester adds: "The energies of billions of cosmic rays that have been hitting the Earth's atmosphere for five billion years far exceed those we will create at the LHC, so by this logic time travellers should be here already. If these wormholes appear I will personally eat the hat I was given for my first birthday before I received it."