Apples Fall From The Sky in England

Stunned motorists were forced to brake sharply to avoid the falling fruit, believed to be swept up by a vortex caused by freak weather conditions in Coventry. 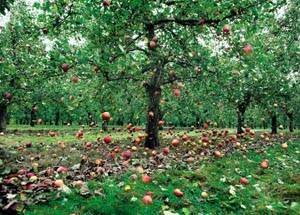 An avalanche of more than 100 apples rained down over a main road in Keresley, Coventry on Monday night.

The street was left littered with apples after they pelted car windscreens and bonnets just after rush-hour.
The bizarre downpour may have been caused by a current of air that lifted the fruit from a garden or orchard, releasing it over the junction of Keresley Road and Kelmscote Road.

One driver said: "The apples fell out of the sky as if out of nowhere. They were small and green and hit the bonnet hard.

"There were other cars on the road at the time too and everyone had to stop their cars suddenly.

"It wouldn’t surprise me if some cars were damaged. I know the area well and there are no apple trees around."

Yesterday, the smashed apples could still be seen up and down the 20-yard stretch of road.
Dave Meakins, a retired fork lift truck driver, said he thought the apples had been thrown as a prank by children.

"I honestly don’t know where the apples could have come from," he said.
"I assumed kids must have thrown them because we do get the occasional egg and apple thrown but there’s way too much for that.
"I would love to know where they came from."

Some said they thought the apples had fallen from a passing plane.
Keresley parish councillor Sandra Camwell said a freak black-out happened on the same road last year.
She said: "Strange things do happen in this part of the world. I think it’s highly likely that apples did fall from the sky.
"We’re in an area with a spooky history, where there have been witches for centuries, after all."

The Met Office said it was possible the apples had been scooped up by a tornado.

He said: "It’s hypothetically possible that a tornado could have picked them up and that they were transported in turbulent air until they fell."
Jim Dale, senior meteorologist, from British Weather Services, said: "The weather we have at the moment is very volatile and we probably have more to come.

"Essentially these events are caused when a vortex of air, kind of like a mini tornado, lifts things off the ground rising up into the atmosphere until the air around it causes them to fall to earth again.

"Returning polar maritime air is such an unstable condition and it basically means air returning from the polar regions which is very unstable.

"We’ve all heard of the fish and frogs falling from the sky and apples is certainly unusual because they have some weight to them but it is not out of the realms of possibility."

Strange things that have fallen out of the sky - Gallery