May 21, 2012 Source: foxnews.com
New photographs reveal what lies beneath the surface of Easter Island, one of the most remote places in the world -- the carved bodies of the island’s 887 famous guardians.

Most people think of the 63-square-mile Pacific island’s silent stone sentinels as simple heads. But the heads all have bodies -- and a backstory that’s only now being pieced together, explained Jo Anne Van Tilburg, director of the Easter Island Statue Project.

“Those statues which are the most photographed are standing in the quarry. They’re buried up to mid-torso level. So it’s understandable that the general public didn’t have a clue that those statues had bodies,” she told FoxNews.com. 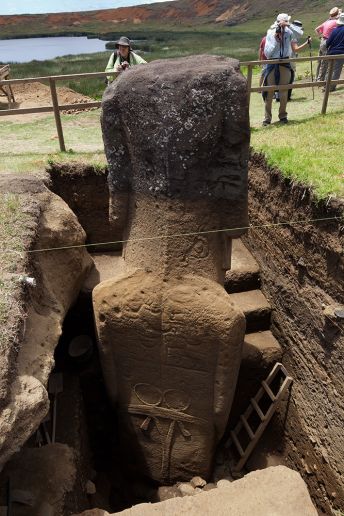 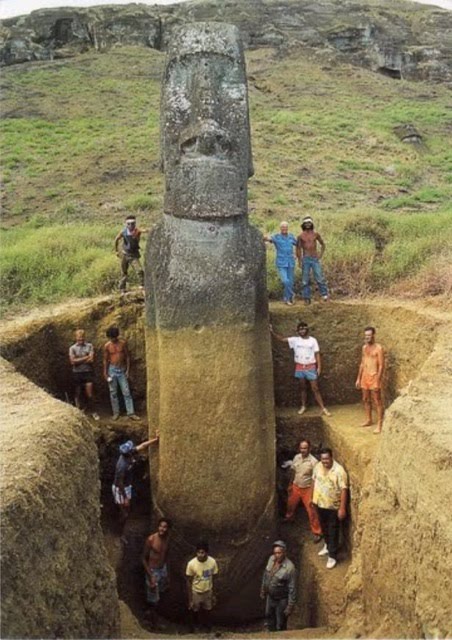 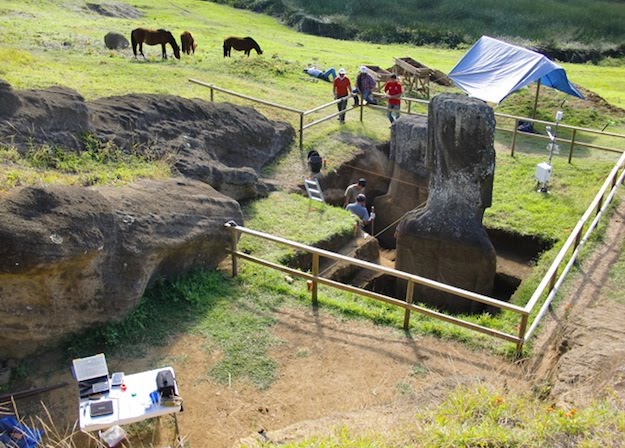 Current belief is that the statues were carved between A.D.1100 up until the 1800s, when an influx of Westerners transformed the culture. Van Tilburg, a fellow with The Cotsen Institute of Archaeology at the University of California, Los Angeles, has only been coming to Easter Island (called Rapa Nui) to do research for twenty years, since 1992. But she first came more than thirty years ago -- and stayed for one clear reason.

“I fell in love with the statues,” she said simply.

“I came to Easter Island in 1981. I was impressed with the number of statues and that they seemed accessible to me, they were on the surface. I wanted to know what was below the surface.”

First Van Tilburg documented the island’s statues and those that have been removed to museums; there are 887 inventoried, though she says the number is closer to 1,000. Then she began the next phase of work to reveal what lay beneath the ground -- covered up not intentionally by men, but through centuries of exposure to the environment.

That process has taken 12 years so far, and may take a lifetime of work.

“It’s the first time that one has been excavated in such a way that the documentation was complete and scientific,” she told FoxNews.com. Other groups have dug in the past, and looters have found their way to the remote island as well.

“People have been treasure hunting there for a long time.”

Van Tilburg is conducting a far more thorough examination, however, working in collaboration with a staff of three in California and ten Rapa Nui natives who are doing all of the excavation work. She is currently gearing up for the sixth scheduled dig on the island, which should run from October through November 2012.

Work so far has revealed evidence of ceremonies and very large quantities of paint; the archaeologists believe the workers painted the statues as well as their own bodies.

She found evidence of human burials nearby as well.

And recent digs have revealed just how the massive heads were carved -- some of which tower more than 30 feet in height, from base to top, and weigh more than 80 tons.

“We found over 500 stone tools. The statues were carved with different types, big heavy picks and finer basalt and obsidian tools to finish details,” she explained. Other tools were used to rub surfaces and burnish the statues. Van Tilburg found evidence of post holes as well, big enough for a tree trunk, and rope guides carved in some statues to elevate them into standing position.

But the intent of the giant sculptures, their reason for being, is still not totally clear.

“Think of China where they buried an army of standing warriors. That group was intended to be together as part of a burial feature. Here, on Easter Island, each statue is individually constructed by groups.”

A signed stone recently discovered beneath one of the heads held a petroglyph of a Polynesian style canoe, and a clue: It was meant to signify identity, Van Tilburg said.

“It was meant to identify that statue either to a family group of people or a subgroup, either carvers or the family unit the carvers came from, or beyond that, to the chief,” she told FoxNews.com. The giant sculptures were most likely relatives and not guardians, in other words.

Later sculptures were far more realistic and individualistic, she noted, which also reveals something about the changing culture, as native peoples moved from highly controlled fiefdoms to a society allowing for more individual expression.

“It’s always important to get beneath the surface of things,” she said.

Easter Island - The Mystery of the Moai - Ancient Civilizations