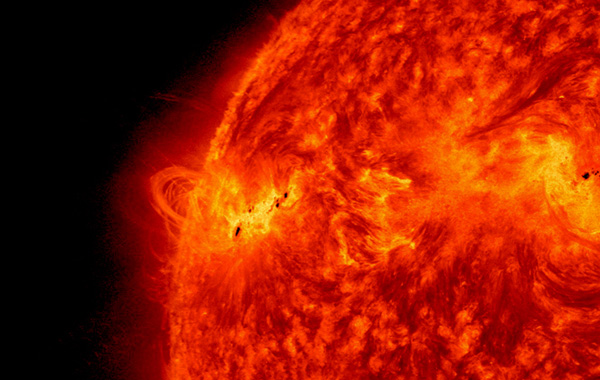 Sun watchers’ faces might well be melting off with all the activity that’s been bursting forth from the sun over the last forty-eight hours.

In the increasing solar activity that’s ramping up to peak during 2013, our star has been releasing dramatic and powerful bursts of radiation into space - reportedly four major eruptions over the last forty-eight hour span. Fortunately the flares were not directed at Earth, but NASA has warned that the coronal mass ejections might pass by and affect satellites, telescopes, or spacecraft.

NASA reported on the third flare:

The sun emitted a third significant solar flare in under 24 hours, peaking at 9:11 p.m. EDT on May 13, 2013. This flare is classified as an X3.2 flare. This is the strongest X-class flare of 2013 so far, surpassing in strength the two X-class flares that occurred earlier in the 24-hour period.

But more was to come, as covered by ScienceWorldReport:

The first flare occurred on Mother’s Day, May 13. A comparatively demure X1.7 flare, it was associated with a coronal mass ejection (CME). This solar phenomenon can send billions of tons of solar particles into space that can reach other planetary bodies days after the initial burst. When directed toward Earth, these CMEs can disrupt satellites and can supercharge the northern lights, creating spectacular displays. In fact, a solar flare that occurred in April did just that, sparking a geomagnetic storm that produced an impressive light show.

The second solar flare that the sun flung into space was a stronger X2.8-class flare, which was also associated with a CME. Experimental NASA models showed that solar particles sped from the sun at a terrific 1,200 miles per second. It was the strongest flare to have occurred all year--until the third flare came along.

The third solar flare occurred on the evening on May 13 and was classified as a X3.2 flare. It’s the strongest to have occurred all year and also hurled a CME into space. Fortunately for us, none of these CMEs are Earth-directed, which means that they won’t be causing issues with satellites.

The sun wasn’t done yet, though. It ejected its fourth and final solar flare in the early morning hours of May 15. The X1-class flare was comparatively tiny to the other ones that the sun had belched out, but it shows that our star is currently more active than it has been in a long while. In fact, NOAA forecasters estimate a 50 percent chance of X-class solar flares and an 80 percent chance of M-class solar flares on May 15, according to spaceweather.com. 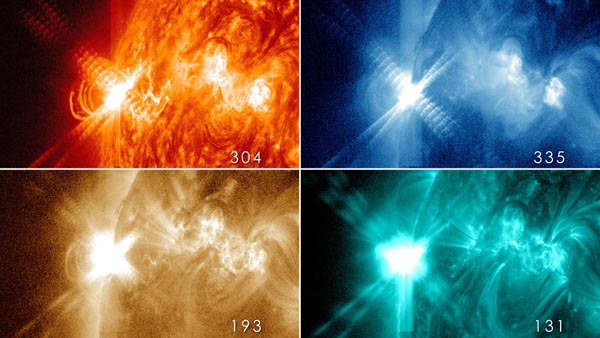 Four images from NASA’s Solar Dynamics Observatory of an X3.2-class flare from late at night on May 13, 2013. Starting in the upper left and going clockwise, the images show the flare in four different wavelengths. ( NASA/SDO)
These solar flares contain a colossal amount of energy, sometimes releasing what is compared to the energetic equivalent of "millions of 100-megaton hydrogen bombs exploding at the same time!" Source

The sun and its cycles are monitored closely by many, and we know from historical record and future projections that solar flares can and will do significant damage to our infrastructure and life on Earth.

Keep watching the skies! (With sunglasses)