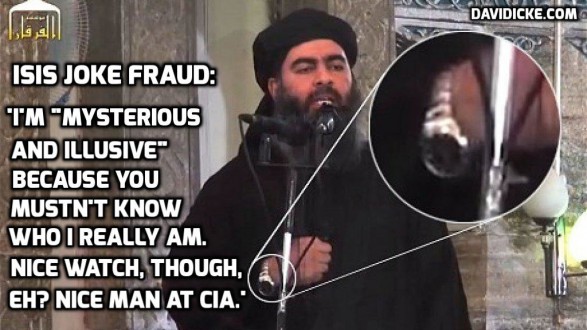 WASHINGTON: The former employee at US National Security Agency (NSA), Edward Snowden, has revealed that the British and American intelligence and the Mossad worked together to create the Islamic State of Iraq and Syria (ISIS).

Snowden said intelligence services of three countries created a terrorist organisation that is able to attract all extremists of the world to one place, using a strategy called ’the hornet’s nest’.

NSA documents refer to recent implementation of the hornet’s nest to protect the Zionist entity by creating religious and Islamic slogans.

According to documents released by Snowden, "The only solution for the protection of the Jewish state "is to create an enemy near its borders".

Leaks revealed that ISIS leader and cleric Abu Bakr Al Baghdadi took intensive military training for a whole year in the hands of Mossad, besides courses in theology and the art of speech..

ISIS Is A Zionist Plot; A Jew Is Leading The Group - Reports Claim

The terrifying group, ISIS, is a Zionist plot as alleged by an employee of the Dutch National Cyber Security Center while reports on the groups’ leader, Abu Bakr al-Baghdadi, being of Jewish origin abound.

The ISIS, the group reportedly beheading children and responsible for the genocide currently happening in Iraq, is a fruit of a Zionist plot, Yasmina Haifi alleged.

"ISIS has nothing to do with Islam. It is a preconceived plan of Zionists who want to deliberately make Islam look bad," Haifi , a project management official working for Dutch National Cyber Security Center, posted in her Twitter account.

Following her tweet, Haifi was then suspended from her job with the Ministry of Security and Justice and the National Coordinator for Counterterrorism and Security (NCTV) saying that they are distancing themselves from Haifis ideas.

"Security and Justice and the NCTV distance themselves from her remarks. And since [the comment] relates to the work of the NCTV and the National Cyber Security Center, cause is shown to terminate her assignment NCSC/NCTV and outsource her work with immediate effect," the Dutch government said in a statement as reported by the NL Times.

Asked about the consequence of her post, Haifi was adamant not to take back her statements.

"Freedom of expression is apparently only for certain groups. I have taken the liberty to express myself and obviously I have to pay for it. I do not know why I should take it down; this is what I think," Haifi said in an interview with local radio program Radio 1.

Haifi’s suspension was made following calls from MPs Joram van Klaveren and Louis Bontes for the Security and Justice Minister Ivo Opstelten to do all necessary step against Haifi.

"...a person who propagates such ideas and is working with state secrets could be a threat to national security," MPs van Klaveren and Bontes said in a joint statement.

"I realize the political sensitivity in relation to my work. This [public reaction] was never my intention," she tweets.

Meanwhile, reports about Abu Bakr al-Baghdadi, so-called "Caliph," and the leader of ISIS being of Jewish origin abound.

al-Baghdadi’s real name is Simon Elliot or Elliot Shimon and was born to Jewish parents and trained in espionage and psychological warfare against Arab and Islamic societies under a Mossad agent, a report from Veterans Today alleged.

In support of its report, the news portal offered English translation from non-English web sites - the Radio ajyal.com and Egy-press.

According to Veterans Today, the plan for the ISIS under al-Baghdadi’s leadership is to "get into the military and civilian heart of the countries that are declared as a threat to Israel in order to destroy to facilitate thereafter, the takeover by the Zionist state on the entire area of the Middle East in order to establish Greater Israel."

Such theories tagging ISIS to a Zionist plot and Jewish leadership may have sprouted from earlier reports related to Edward Snowden.

According to various reports, Snowden divulged that British and American intelligence and the Zionist society created the ISIS, previously called the Islamic State Iraq and the Levant.

According to an Iranian news agency, Snowden revealed that the three entities established the terrorist group for it to be able to attract extremists activities to a one place - this strategy dubbed as the "the hornet’s nest."

"... the recent implementation of an old known as the hornet’s nest to protect the Zionist entity PLAN britannique, and creating a religion including Islamic slogans reject any religion or faith. The only solution for the protection of the Jewish State is to create an enemy near its borders, BUT the draw against Islamic states who oppose his presence," lifting a direct quote from the leaked Snowden documents, Somdaily news reports.