Sep 25, 2015 Source: therealistreport.com
The organized international Jewish community and Israeli NGOs are literally facilitating and financially benefiting from the invasion of Europe. They admit this in their own newspapers. The Jewish Telegraph Agency recently reported: 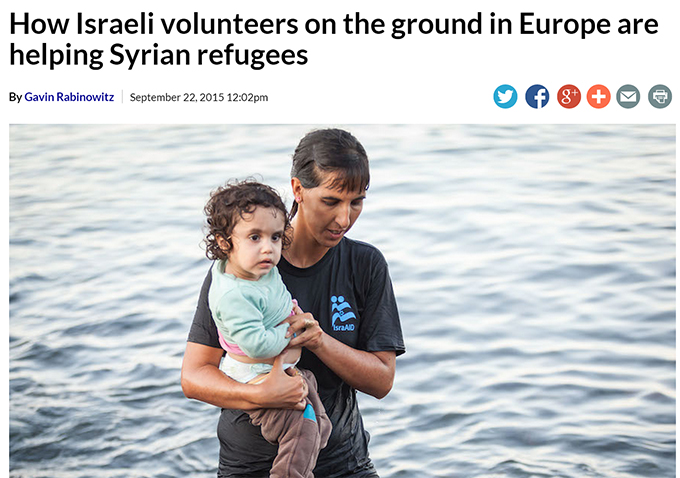 As the small rubber dinghy crowded with Syrians and Afghans emerged from the midnight-black sea to land on a desolate pebble beach, the first people to greet the bewildered and frightened refugees were two Israelis.

“Does anyone need a doctor?” Majeda Kardosh, 27, a nurse from Nazareth, shouted repeatedly in Arabic as the asylum seekers scrambled ashore amid cries of celebration and tears of relief at surviving the short but perilous crossing from Turkey to this Greek island.

Her team partner, Tali Shaltiel, 31, a physician from Jerusalem, stood knee deep in the water, helping a shivering 4-year-old girl out of her wet clothes and a pair of inflatable armbands that would have provided little protection had the overloaded boat capsized at sea.

Kardosh and Shaltiel are part of a small advance group of volunteers from IsraAid, an Israeli nongovernmental organization that is trying to provide some assistance to the hundreds of thousands of refugees and migrants who are flowing into Europe.

While IsraAid has plenty of experience in disaster relief and assistance in 31 countries — from the 2011 earthquake and tsunami in Japan to the Ebola outbreak in West Africa — this mission presents a unique challenge: The beneficiaries come from countries that are traditionally hostile, or even officially still at war, with Israel. […]

Even though the so-called “refugees” IsraAid and other Jewish charity organizations are helping “come from countries that are traditionally hostile, or even officially still at war, with Israel,” these Jewish groups still want to help them. However, the “help” the Jews are providing to the millions of invaders flooding into Europe and America is merely a ploy to advance Jewish ethnic interests: namely, the demographic annihilation of the West. Make no mistake about that.

As Andrew Joyce recently explained in an outstanding article published on The Occidental Observer, radical Jewish intellectuals and propagandists have been arguing for decades that:

White nationalities and identities are simply harmful, diseased, “racist” constructs which should be slated for destruction if the world is to enter a better age. Demographic dilution, if not total annihilation, is the surest way of weakening and destroying a working sense of national and ethnic identity. Supporting refugees, whether by political agitation, propagandizing their fabricated tales to White students, or helping to mould and disseminate their emotive emblems, thus fits the goals and aspirations of organized Jewry very well. […]

Jews do not feel safe and secure in homogeneous societies, especially White homogeneous societies. Leonard Glickman, the former president and CEO of the Hebrew Immigrant Aid Society, once described the Jewish agenda behind their promotion of “multiculturalism” and massive Third World immigration into America and the West: “The more diverse American society is the safer [Jews] are.”