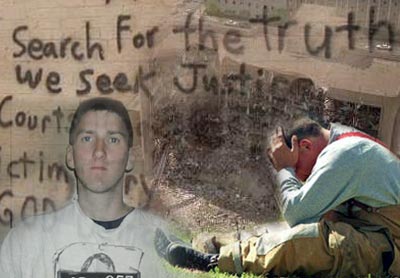 Long-secret security tapes showing the chaos immediately after the 1995 bombing of the Oklahoma City federal building are blank in the minutes before the blast and appear to have been edited, an attorney who obtained the recordings said Sunday.

"The real story is what's missing," said Jesse Trentadue, a Salt Lake City attorney who obtained the recordings through the federal Freedom of Information Act as part of an unofficial inquiry he is conducting into the April 19, 1995, bombing that killed 168 people and injured hundreds more.

Trentadue gave copies of the tapes to The Oklahoman newspaper, which posted them online and provided copies to The Associated Press.
The tapes turned over by the FBI came from security cameras various companies had mounted outside office buildings near the Alfred P. Murrah Federal Building. They are blank at points before 9:02 a.m., when a truck bomb carrying a 4,000 pound fertilizer-and-fuel-oil bomb detonated in front of the building, Trentadue said. 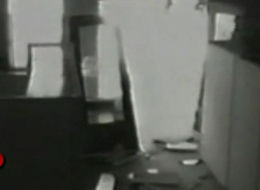 "Four cameras in four different locations going blank at basically the same time on the morning of April 19, 1995. There ain't no such thing as a coincidence," Trentadue said.

He said government officials claim the security cameras did not record the minutes before the bombing because "they had run out of tape" or "the tape was being replaced."

"The interesting thing is they spring back on after 9:02," he said. "The absence of footage from these crucial time intervals is evidence that there is something there that the FBI doesn't want anybody to see."

A spokesman for the FBI in Oklahoma City, Gary Johnson, declined to comment and referred inquiries about the tapes to FBI officials in Washington, who were not immediately available for comment Sunday.
The soundless recordings show people rushing from nearby buildings after the bomb went off. Some show people fleeing through corridors cluttered with debris. None show the actual explosion that ripped through the federal building.

FBI agents did not report finding any security tapes from the federal building itself.

The FBI in the past refused to release the security camera recordings, leading Trentadue and others to contend the government was hiding evidence that others were involved in the attack.

"It's taken a lawsuit and years to get the tapes," Trentadue said.
He received the latest batch of tapes over the summer in response to an April request for video from security cameras in 11 different locations. Nothing on the tapes was unexpected.

"The more important thing they show is what they don't show," Trentadue said. "These cameras would have shown the various roads and approaches to the Murrah Building."

Trentadue began looking into the bombing after his brother, Kenneth Trentadue, died at the Oklahoma City Federal Transfer Center in August 1995. Kenneth Trentadue was a convicted bank robber who was held at the federal prison after being picked up as a parole violator at his home in San Diego in June 1995.

He was never a bombing suspect, but Jesse Trentadue alleges guards mistook his brother for one and beat him to death during an interrogation. The official cause of Kenneth Trentadue's death is listed as suicide, but his body had 41 wounds and bruises that Jesse Trentadue believes could have come only from a beating.

A judge in 2001 awarded Kenneth Trentadue's family $1.1 million for extreme emotional distress in the government's handling of his death.
Jesse Trentadue said he has received about 30 security tapes, including some images that were used as evidence at bomber Timothy McVeigh's trial. McVeigh was convicted on federal murder and conspiracy charges and executed in 2001. Coconspirator Terry Nichols is serving life in prison on federal and state bombing convictions.

Trentadue said he is seeking more tapes along with a variety of bombing-related documents from the FBI and the CIA. An FOIA request by Trentadue for 26 CIA documents was rejected in June. A letter from the National Geospatial-Intelligence Agency, which reviewed the documents, said their release "could cause grave damage to our national security."

Trentadue said he gave the latest set of tapes to The Oklahoman because of their historical value. The newspaper has agreed to provide copies to the Oklahoma City National Memorial & Museum. 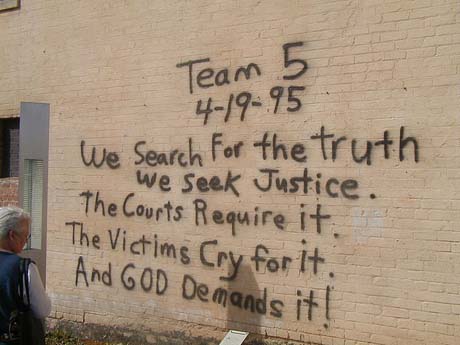 A rescue team left a message during rescue efforts in the aftermath of bombing.

"The FBI has released long-secret security tapes showing the chaos immediately after the 1995 bombing of the Oklahoma City federal building. The soundless recordings show people rushing from nearby buildings after the fertilizer bomb went off. (Sept. 27)"

"This is from the extras of "9-11 in Plane Site." I thought there was only one (1) bomb that caused the devastation on that fateful day. These news clips paint a different picture with multiple newscasts reporting on up to three (3) very sophisticated bombs being in the building."

"Weapons and Explosives expert USAF (Retired) Brig. General Ben Partin was the main expert who inspected the site of the Oklahoma City bombing of the Murrah Federal Building, analyzing hundreds of photos of the disaster. In this June 1998 speech to the Wallace Institute in Santa Clara, California, he offers his take and describes his testimony to Congress."

"Evidence of a cover up in the Oklahoma City Bombing."