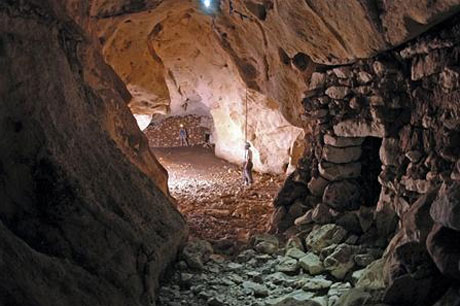 Archeologists Victoria Rojas (front) and Lara Hindersten (back) work at a site at the village of Tahtzibichen in Merida, Yucatan Peninsula, April 12, 2008.
Mexican archeologists have discovered a maze of stone temples in underground caves, some submerged in water and containing human bones, which ancient Mayans believed was a portal where dead souls entered the underworld.

Clad in scuba gear and edging through narrow tunnels, researchers discovered the stone ruins of eleven sacred temples and what could be the remains of human sacrifices at the site in the Yucatan Peninsula.

Archeologists say Mayans believed the underground complex of water-filled caves leading into dry chambers -- including an underground road stretching some 330 feet -- was the path to a mythical underworld, known as Xibalba.

According to an ancient Mayan scripture, the Popol Vuh, the route was filled with obstacles, including rivers filled with scorpions, blood and pus and houses shrouded in darkness or swarming with shrieking bats, Guillermo de Anda, one of the lead investigators at the site, said on Thursday.

The souls of the dead followed a mythical dog who could see at night, de Anda said. 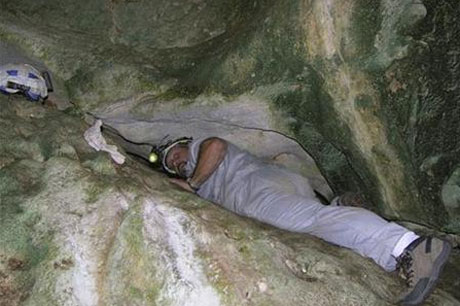 Archeologist Guillermo de Anda, one of the lead investigators, works at a site in the village of Tahtzibichen in Merida, Yucatan Peninsula, April 12, 2008. Mexican archeologists have discovered a maze of stone temples in underground caves, some submerged in water and containing human bones, which ancient Mayans believed was a portal where dead souls entered the underworld.
Excavations over the past five months in the Yucatan caves revealed stone carvings and pottery left for the dead.

"They believed that this place was the entrance to Xibalba. That is why we have found the offerings there," de Anda said.

The Mayans built soaring pyramids and elaborate palaces in Central America and southern Mexico before mysteriously abandoning their cities around 900 A.D.

They described the torturous journey to Xibalba in the Popul Vuh sacred text, originally written in hieroglyphic script on long scrolls and later transcribed by Spanish conquerors.

"It is very likely this area was protected as a sacred depository for the dead or for the passage of their souls," said de Anda, whose team has found ceramic offerings along with bones in some temples.

Different Mayan groups who inhabited southern Mexico and northern Guatemala and Belize had their own entrances to the underworld which archeologists have discovered at other sites, almost always in cave systems buried deep in the jungle.

In the Yucatan site they have found one 1,900-year-old ceramic vase, but most of the artifacts date back to between 700 and 850 A.D.

"These sacred tunnels and caves were natural temples and annexes to temples on the surface," said de Anda.