Radioactive Waste Dumped Into Rivers During Fukushima Clean Up

Jan 8, 2013 Source: theintelhub.com
As the fallout from the Fukushima disaster continues to deepen, more information is being uncovered about the negligence and dishonesty on the part of the government and other responsible agencies.

According to The Asahi Shimbun:

“Cleanup crews in Fukushima Prefecture have dumped soil and leaves contaminated with radioactive fallout into rivers. Water sprayed on contaminated buildings has been allowed to drain back into the environment. And supervisors have instructed workers to ignore rules on proper collection and disposal of the radioactive waste.

Decontamination is considered a crucial process in enabling thousands of evacuees to return to their homes around the crippled Fukushima No. 1 nuclear power plant and resume their normal lives. But the decontamination work witnessed by a team of Asahi Shimbun reporters shows that contractual rules with the Environment Ministry have been regularly and blatantly ignored, and in some cases, could violate environmental laws.”

Just afew weeks ago we reported that A former worker at the Fukushima nuclear plant has filed a lawsuit against TEPCO, the Tokyo Electric Power Company for downplaying the danger and severity of the disaster.

It was also reported last month that irradiated fish captured near the inoperative nuclear plant showed 25,800 becquerels of caesium per kilo, which is actually 258 times the level determined ‘safe’ by the government. 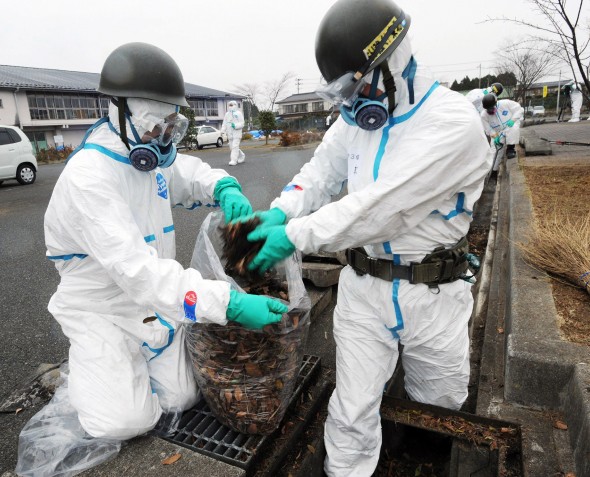 Workers collect fallen leaves from a gutter in Fukushima Prefecture as they begin decontamination west of the stricken nuclear power plant on Dec. 8, 2011. AFP