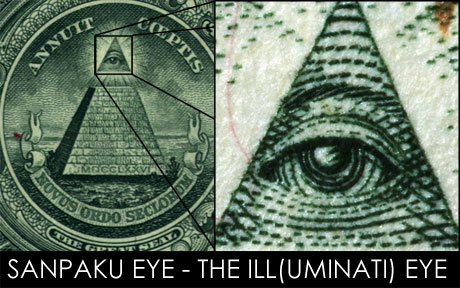 When a baby is born, the iris, or colored part of the eye, is usually beautifully balanced between the upper and lower eye lids. It touches the upper and lower lids, so that no white, or sclera, shows above or below. The sclera is visible only to the left and right of the iris. This indicates a balanced and healthy nervous system. The baby is alert and in generally sound health.

When a person dies, the iris rises so that it partially disappears under the upper eyelid. The white sclera shows below. In Oriental Medicine, we call such an appearance sanpaku, which means "three whites" showing. Three whites, or sanpaku, is common among those who are ill or exhausted. It is most severe among those who are gravely ill and approaching death.

Three whites show that a person's nervous system is seriously imbalanced. Such a person's mind, body, and spirit are out of harmony with the larger forces of the cosmos. The person's intuition is off; his or her ability to assess people and situations is weak.

Generally, there are two types of sanpaku. The first is yin sanpaku, white showing below the iris, which is very common, especially among drug addicts. Here, the iris floats upward, revealing the sclera below. The second type is yang sanpaku, white showing above the iris; here the iris sinks downward toward the bottom eyelid. This reveals a dangerous or violent character. Charles Manson has beautiful yang sanpaku eyes.

If the white shows below the iris, the condition is yin, indicating that the dangers come from outside. A person with yin sanpaku eyes will place himself or herself in dangerous or threatening situations unwittingly- and may not survive.

If the white shows above, the condition is yang, and the danger comes from within. A person with yang sanpaku eyes is extremely violent, filled with rage, and likely poses a threat to himself and others. He may destroy himself, but may also take others with him.

The macrobiotic philosopher George Ohsawa wrote a book called You Are All Sanpaku and dedicated it to John Kennedy and Abraham Lincoln, among others. Ohsawa said they were all seriously sanpaku and thus suffered from impaired judgment that indicated poor health and premature death. These people were excessively yin sanpaku. All of them accepted danger, but were unable to survive it.

Yin sanpaku, or white showing below the isis, is the result of excessive intake of yin substances, such as sugar, refined grains, alcohol, and medical drugs.

Yang sanpaku, or white showing above the iris, comes from excessive intake of meat, salt, and hard cheeses, and from indulgence in violence. Yang sanpaku shows a character that is self-centered and bent on fulfilling its own ambition, something without regard for the cost.

Balanced eyes, with the iris touching the upper and lower lids, reveal a balanced condition and sound judgment. Balanced eyes come from a balanced view of life and sound dietary habits, especially the consumption of whole cereal grains and fresh vegetables.

When former Indian Prime minister Indira Gandhi was killed, Time magazine published a series of photographs of her, including one taken just before she was assassinated. The picture clearly revels her yin sanpaku eyes, which reflected her condition and revealed that she was in danger.