Silent Sam, the Confederate monument at UNC-Chapel Hill, was doused with blood and red ink by a protester Monday, in a defiant act that was broadcast on Facebook Live.

In an email to the media, Maya Little took responsibility for defacing the statue, which has been at the center of intensifying protests during this academic year. Little said she has been an organizer for the Silent Sam Sit-In since September. The Move Silent Sam group identified her as a doctoral student in UNC's history department.

In the letter, directed at UNC Chancellor Carol Folt, Little said she was attempting to add context to the statue in her own way.

"Silent Sam is violence; Silent Sam is the genocide of black people; Silent Sam is antithetical to our right to exist," Little wrote. "You should see him the way that we do, at the forefront of our campus covered in our blood." 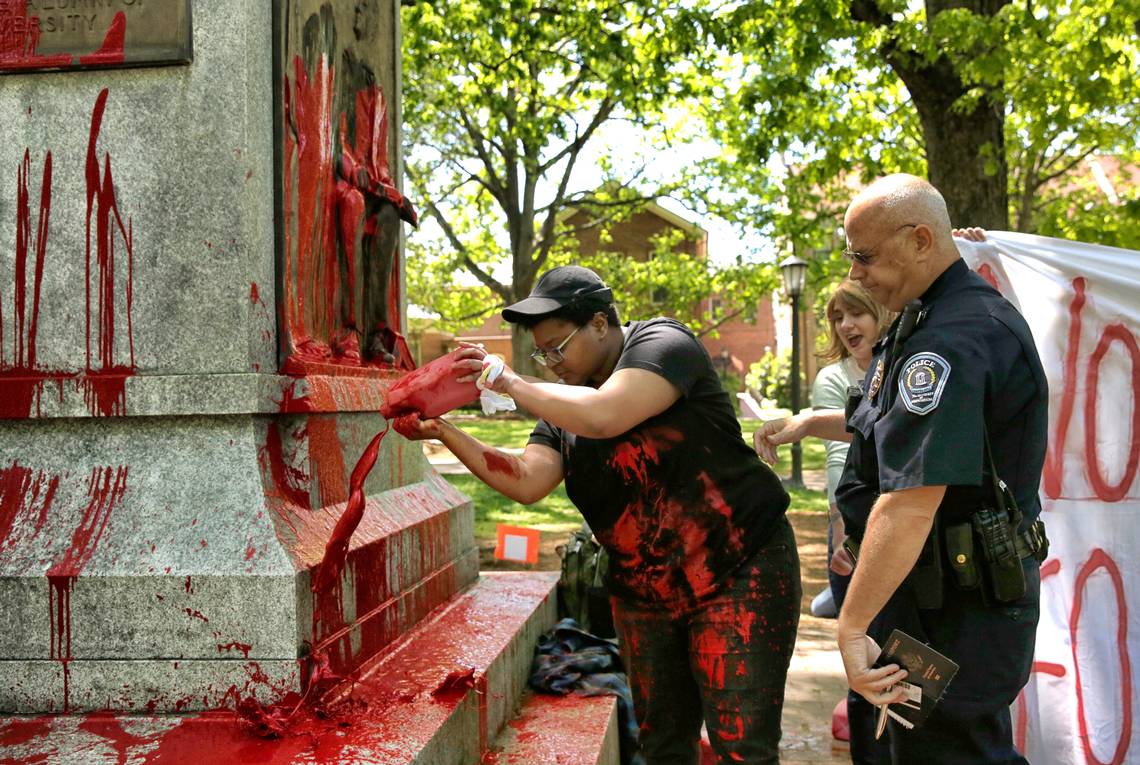 Video posted to social media showed Little being led away by UNC police as protesters yelled, "Hey, hey, ho, ho, this racist statue's got to go!" and "Sam is silent; we are loud."

A short distance from the monument, officers stopped long enough for someone to bandage the student's cut hand. She was then handcuffed, arrested and taken from the scene in a police car.

Little was charged with defacing, striking, marking or injuring a public statue, according to the Orange County Magistrate's Office. She was released on a promise to appear in court.

Protesters have targeted Silent Sam for decades, but there have been large demonstrations and sit-ins since August, in the aftermath of deadly violence during last year's white nationalist march in Charlottesville, Va.

Folt has said she thinks the statue is detrimental to the university. But she said university lawyers have concluded the statue can't be relocated because of a 2015 state law that protects historic monuments. Others think the law would allow the statue to be moved in order to preserve it.

The N.C. Historical Commission is considering a request from Gov. Roy Cooper, a Democrat, to move Confederate statues from State Capitol grounds to a Civil War battlefield in Johnston County. Several individuals have made a similar formal request that the commission move Silent Sam.

Opponents of removing the Confederate statues dominated a public hearing before the commission in March.

For now, UNC is proceeding with plans for new signs that put Silent Sam into context.

Some historians have said that the statue had racist implications when it was unveiled in 1913. At the dedication speech, Julian Carr, a wealthy industrialist and namesake of Carrboro, described horse whipping a "Negro wench" and said Confederate soldiers "saved the very life of the Anglo Saxon race in the South."

Students read parts of Carr's dedication speech at the protest on Monday.

"What do you see when you look at this statue, chancellor?" Little said in her statement. "We see the mutilation of black bodies, the degradation of black people, the celebration of an army that fought for our ancestors' enslavement. I see Julian Carr whipping a black woman. I see your willingness to traumatize, dehumanize and endanger every black person on this campus."