Jan 3, 2007 By Henrik Palmgren | redice.tv
Video picked up from cyberspaceorbit.com

The Color of Mars
By Holger Isenberg | mars-news.de 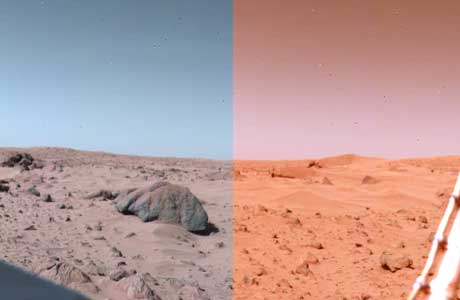 The Red Planet, this name has to appear in every article of the main-stream press on Mars. The same importance play the little green men in contributions of renowned daily German papers such as Frankfurter Allgemeine Zeitung or Sueddeutsche Zeitung published on the Mars meteorite ALH84001.

Without doubt, the planet appears red with the naked eye in the night sky, whereby our earth viewed from Mars, would appear clearly blue, due to the 70% water coverage in connection with refraction of light in the atmosphere. With a reverse relation of the water land distribution however, rather a brown-green planet would be to be seen from space.

The color of the atmosphere, caused by Rayleigh Scattering at gas molecules, determines thus only in very small amount the color of a planet as seen from space and also directly on the surface!

Why then should the Mars sky, as NASA/JPL PR-department spreads it, should appear red? This coloring is justified if at all, only with the refraction of light at atmospheric dust. But such masses of dust in the atmosphere do not prevail over years on a planet, which has large water-clouds, fog and ground frost, since water would wash these away after short time.

Astronomers at the Hubble Spacetelescope and amateur-astronomers are observing, since long time now, white water-clouds and blueish atmosphere.

Indeed, when the first color picture from Viking 1 was received on Earth, the Mars soil was red-brown and the sky was blue, a landscape comparable with the desert of Arizona (fig. A and B).

These are original pictures of the two probes, which are only slightly color corrected to match the filter response values of the camera system. However, the original data without correction, you see on the right of each image, has almost no detectable difference in color.

The Viking cameras operated according to the principle of a color scanner, whereby for different light wave lengths different sensors with separate data channels are used.

To create a colorful picture from this scanner data, a color calibration table is necessary. These tables can be seen near the mast of the parabolic antenna in Pic. A and B and show among grayscales the three basic colours (RGB) of a color monitor.

Already with the naked eye it can be detected there that the colours are correctly shown. Also in Pic.E this can be acknowledged, since the white ground frost (water ice!) supplies a natural color calibration to the white alignment.

Pic.C shows a typical (NASA-)red Mars picture in the color, taken 18 months later. How does it come to this color change, although the sharply bordered shadows and the otherwise clear colours suggest no atmosphere dust?

The solution of the mystery appears, when using an image processing program: By rising the color-values of blue and green about 50% and 25% one gets to Pic.D, which shows the well known true coloring from Pic.A and B.