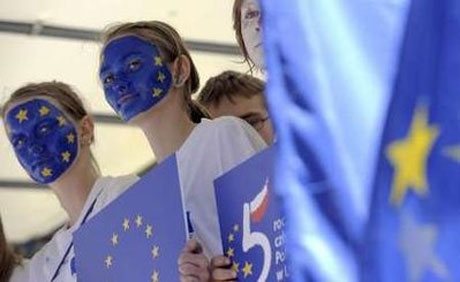 A writer who was collecting material for a fictional book based around the premise that top Nazis, seeking to preserve their power at the end of the second world war, conspired to create a Fourth Reich under the auspices of the European Union, actually discovered documents proving the plot to be true.

In a Daily Mail piece, Adam Lebor reveals how he uncovered US Military Intelligence report EW-Pa 128, also known as The Red House Report, which details how top Nazis secretly met at the Maison Rouge Hotel in Strasbourg on August 10, 1944 and, knowing Germany was on the brink of military defeat, conspired to create a Fourth Reich - a pan-European economic empire based around a European common market.

Top Nazi industrialists were ordered by SS Obergruppenfuhrer Dr Scheid to set up front companies abroad and pose as democrats in order to achieve economic penetration and lay the foundations for the re-emergence of the Nazi party.

“The Third Reich was defeated militarily, but powerful Nazi-era bankers, industrialists and civil servants, reborn as democrats, soon prospered in the new West Germany. There they worked for a new cause: European economic and political integration,” writes Lebor.

Wealthy Nazi industrialists like Alfried Krupp of Krupp Industries and Friedrich Flick, as well as front companies like BMW, Siemens and Volkswagen, set about the task of building a new pan-European business empire. According to historian Dr Michael Pinto-Duschinsky, an adviser to Jewish former slave labourers, “For many leading industrial figures close to the Nazi regime, Europe became a cover for pursuing German national interests after the defeat of Hitler….The continuity of the economy of Germany and the economies of post-war Europe is striking. Some of the leading figures in the Nazi economy became leading builders of the European Union.”

Banking titan Hermann Abs, who joined board of Deutsche Bank during the rise of Nazis, also sat on the supervisory board of I.G. Farben, the company that made the Zyklon B gas used to kill concentration camp victims. “Abs was put in charge of allocating Marshall Aid - reconstruction funds - to German industry. By 1948 he was effectively managing Germany’s economic recovery,” writes Lebor.
“Crucially, Abs was also a member of the European League for Economic Co-operation, an elite intellectual pressure group set up in 1946. The league was dedicated to the establishment of a common market, the precursor of the European Union.”

The European League for Economic Co-operation developed policies for European integration that almost mirrored those proposed by Nazis just years previously.
In his book “Europe’s Full Circle,” Rodney Atkinson provides a list of policies proposed by Nazis and their similarity to today’s European Union.


“Is it possible that the Fourth Reich those Nazi industrialists foresaw has, in some part at least, come to pass?” asks Lebor.

“These three typewritten pages are a reminder that today’s drive towards a European federal state is inexorably tangled up with the plans of the SS and German industrialists for a Fourth Reich - an economic rather than military imperium.”
As we have highlighted in the past, Nazism and the EU have some very disturbing parallels. Indeed, the two are fundamentally intertwined and the origins of the EU can be traced directly back to the Nazis.

The foundations for the EU and ultimately the Euro single currency were laid by the secretive Bilderberg Group in the mid-1950’s. Bilderberg’s owned leaked documents prove that the agenda to create a European common market and a single currency were formulated by Bilderberg in 1955. One of the group’s principle founders was H. Prince Bernhard of the Netherlands, a former Nazi SS officer.

But the ideological framework for the European Union goes back even further, to the 1940’s when top Nazi economists and academics outlined the plan for a single European economic community, an agenda that was duly followed after the end of the second world war.
In his 1940 book The European Community, Nazi Economics Minister and war criminal Walther Funk wrote about the need to create a “Central European Union” and “European Economic Area” and for fixed exchange rates, stating “No nation in Europe can achieve on its own the highest level of economic freedom which is compatible with all social requirements…The formation of very large economic areas follows a natural law of development….interstate agreements in Europe will control [economic forces generally]…There must be a readiness to subordinate one’s own interests in certain cases to those of [the EC].”

Fellow Nazi Gustav Koenig observed, “We have a real European Community task before us…I am convinced that this Community effort will last beyond the end of the war.”

In 1940, Minister of Propaganda Joseph Goebbels ordered the creation of the “large-scale economic unification of Europe,” believing that “in fifty years’ time [people would] no longer think in terms of countries.” Just 53 years later, the European Union in its current form was established.

Other top Nazis who called for the creation of a pan-European federal economic superstate include Ribbentrop, Quisling and Seyss-Inquart, who spoke of “The new Europe of solidarity and co-operation among all its people… will find…rapidly increasing prosperity once national economic boundaries are removed.”

Such rhetoric would not look out of place at a present day Bilderberg, Trilateral Commission or CFR confab.

The Nazis killed people who spoke out against the Third Reich, whereas the EU has implemented an altogether more efficient solution - simply kill their free speech instead.

A Dutch MP was recently refused entry to Britain because his political opinions were deemed offensive under EU laws. Euro MP’s have consistently attempted to ban the “dangerous and unregulated blogosphere” in an attempt to shut down free speech on the Internet. Under the 1999 ruling of the European Court Of Justice (case 274/99), it is illegal to criticize the EU and the EU is on a mission to outlaw any national political parties that do not pander to the European federal superstate agenda.

Most of the individuals who hold the reigns of power in the European Union are not Nazis, indeed, they probably believe themselves to be fair-minded liberals working for the “greater good”. However, the European Union by its very nature is totalitarian, because it seeks to remove power from national governments accountable to their electorate and centralize it into the hands of supra-national entities that are accountable to nobody but themselves. It also seeks to remove the right of free speech for anyone in a position of influence who criticizes this agenda.

The fact that the EU was a brainchild of top Nazi economists and industrialists, formulated as a means of preserving dictatorial power and then implemented by a former Nazi working under the auspices of the Bilderberg Group in 1955, proves that the entire European Union system is poisoned with a legacy and a raison d’être of totalitarianism.
This is becoming increasingly obvious in the 21st century as popular social movements across Europe rise up to oppose the blatant power grab being undertaken by the EU via the Lisbon Treaty, which will again be put before Irish voters later this year despite them already rejecting it in a national referendum, which prevented the treaty from being enforced.