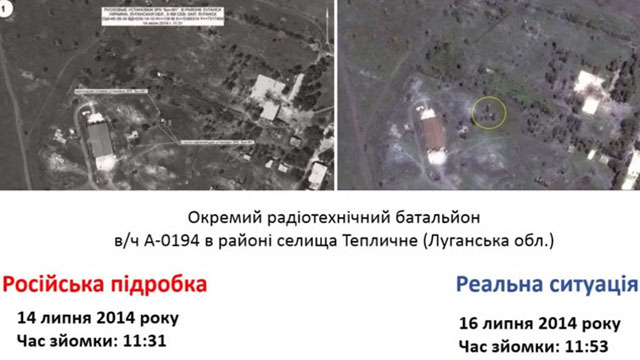 Satellite images Kiev published as ‘proof’ it didn’t deploy anti-aircraft batteries around the MH17 crash site carry altered time-stamps and are from days after the MH17 tragedy, the Russian Defense Ministry has revealed.

The images, which Kiev claims were taken by its satellites at the same time as those taken by Russian satellites, are neither Ukrainian nor authentic, according to Moscow’s statement.

The Defense Ministry said the images were apparently made by an American KeyHole reconnaissance satellite, because the two Ukrainian satellites currently in orbit, Sich-1 and Sich-2, were not positioned over the part of Ukraine’s Donetsk Region shown in the pictures.

Moscow claims weather and lighting conditions in the images were not possible at the dates and times Ukraine claims they were made, the Russian ministry said.

At least one of the images published by Ukraine shows signs of being altered by an image editor, the statement added.