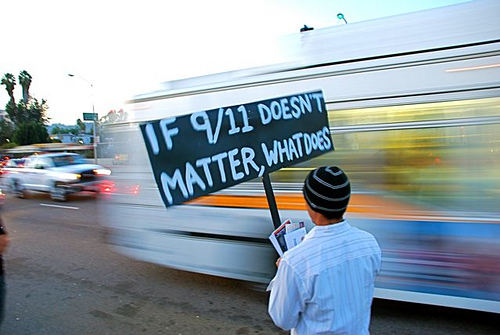 During the past 10 years I have not met a single individual who, after doing research on the subjectpen, switched from questioning the official narrative of the events of 9/11/2001 to believing the official narrative of those events.. It is always the other way around. Why do you think that is? There are good reasons for this, and I will try to explain this phenomenon right now.

The term "conspiracy theorist", perhaps the most misapplied description in our vernacular, is often used to describe 9/11 truthers. Perhaps that term does apply to a segment of the 9/11 truth movement. But in most cases a more accurate description of 9/11 truthers is probably "expert", or "scholar", or "researcher." You see, much of the doubt cast on the official narrative of the events of 9/11 has not come in the form of speculated accusations, or "theories." In fact, it has come in the form of questions that have been raised after a careful study of the official and undisputed events and details.

As is the case with so many issues, people tend to stand strong and argue a position or voice an opinion about an event like 9/11. But, when questioned about the many details surrounding that event they have no answers. They are clueless. And they are, in the end, dumbfounded.

I can not tell you how many times I have discussed the events of 9/11 with an outraged citizen who can not believe that I would "accuse our own government" of such a terrible thing as conducting a false flag operation, only to hear the phrase "no, I did not know that, is that true?" repeated over and over as I "educate" them about those little things called DETAILS. I can not count the pale-faced stunned looks on people’s faces as I exposed them to some of the "official facts" they never suspected, and never knew. I have walked away from many a confrontation with newly educated "patriotic Americans", only to worry about whether or not they would again resume breathing correctly.
They would never do such a thing

A common start and end to any intelligent discussion about the events of 9/11 is prefaced by the assumption that no American would betray his or her country by allowing or conducting an attack on the American people. Well, the people who take this position know nothing about history, let alone human nature. They also don’t know about the public positions, declarations, speeches and published documents written by the people who ran our nation on that day.

False flag operations have taken place for generations, in this nation and nations around the world. Many of these operations have been exposed, but proof of many of these activities is probably hidden away in secret documents that may one day come to light. You can however, start your exploration on the topic by researching one plan for American self-inflicted terrorism that became public, Operation Northwoods. Do I detect my first "I did not know this, is it true?" May I suggest you also peek into the neoconservative teachings of the principles involved in running our nation at the time of the "new Pearl Harbor" that took place in 2001.

But the 9/11 Commission did not find anything wrong

I can not believe how many people do not know the genesis or mission of the 9/11 Kean Commission. From the initial appointment of one of America’s most nefarious political figures as its original leader, Henry Kissinger, - to its executive director whose area of expertise and education were in the creation and maintaining of public myths, Philip D. Zelikow,- people have no idea as to who comprised or what the mandate was for this commission.

To give you some kind of idea as to why the "findings" of this commission can NOT be used to back up any talking points on the topic of 9/11, let me remind you what the official task of this commission was. The Kean Commissions was told to document the official story and make national security recommendations based on that story. The only information that was to be included in the official report had to match the official story. If any one member of the committee objected to any testimony or finding, that piece of information was to be left out of the report For some examples of this you can talk to the thousands of people who became 9/11 truthers as a result of their testimony being omitted from and contradicted by the final report.

Start with the WTC worker credited with being the last man out of the WTC William Rodriguez. See if he can tell you why, after being invited to the White House and meeting with George W. Bush, his testimony about witnessing explosions in the sub basement of the WTC moments prior to the first plane hitting the building was omitted from the Kean report. And for more details you can read David Ray Griffin’s book called The 9/11 Commission Report: Omissions And Distortions. It pretty much translated the Kean report into a stack of rather harsh and useless toilet paper. Are the "I did not know this, is it true?" responses piling up yet?

Are you even qualified to discuss the issue?

What people don’t understand when discussing issues like 9/11 is that not everyone is qualified to join the discussion, let alone impose an "opinion" on the topic. 9/11 is not really a topic that is open to opinion. The conclusion you draw from the facts are open to opinion, but what many people don’t realize about the 9/11 truth movement is that its opinions are based on facts, and grounded in the reality that its members know more of the facts than the average person. If you have a discussion with a doctor about medicine your opinions and views on the subject don’t exactly merit the same consideration as do those of a group of physicians..

Similarly, someone like me (and many 9/11 truthers), has the equivalent of 3 PhD’s on topics such as 9/11. I am a full time journalist. I research this kind of stuff every single day and I have been doing so since 2003. Not everyone is qualified to debate me on an issue like 9/11. We can discuss it. You can ask a great number of questions and perhaps inform me about aspects of the issue of which I am not aware. But you can’t impose your "opinions" on me, nor can you do that to a majority of 9/11 truthers. And by the way, when it comes to opinions vs. facts, facts win. FOX News watchers don’t seem to be able to grasp this concept.

People have to realize that what separates the unsuspecting mainstream masses from the 9/11 truth movement are factual information and details. Forget the claims and accusations. You don’t need to go that far to understand that there is something fishy going on here. Just look at the official body of evidence. It’s all there and it will make your head spin. Don’t listen to the accusations, just examine the evidence.You’ll understand so much if you really take a good look. In time, if you do your research thoroughly you may just compile a list of suspects, as have many of the 9/11 truthers. I have. But we are not there yet. We really have enough official evidence to lead to quite a few criminal indictments, and I am not kidding about this. But for now let’s just talk about the facts and hope that some day we will have the real answers declared by juries in courtrooms. Chances are that many truthers would be proven correct in their accusations - but again, for now, just look at the facts and understand that there are a lot of questions that need to be answered. And, find out that it’s okay to say, "I did not know this, is it true?"

So, are you qualified to take part in a discussion with a 9/11 truther?

If you don’t know about the "coincidental" military drills taking place on September 11, 2001, or about the interesting little political cabal known as PNAC or the Project for a New American Century, or if you don’t know what WTC7 is, or the 1,500 plus architects and engineers who have serious questions about how and why it dropped like a pancake on 9/11, or if you don’t know about the fact that up until his supposed murder, the FBI did not list Osama bin Laden as wanted for the events of 9/11 because, in their own words, they had no proof of his involvement, then you are not qualified to enter a discussion about the event. You have a lot of homework to do before you can chime in. So on you go...study...but finish this article first. I’ll bet the ranch that you’ll be saying, over and over, "I did not know this, is it true?"

Why don’t we accept the official story?

Here is a question that you should really think about. Don’t just chime in with your own uninformed opinion because I am going to give you the answer to this question; the real honest answer. Why do you think I, Jesse Richard, founder of TvNewsLIES.org, have drawn the conclusion that the official narrative of the events of 9/11 is a crock? The answer to that is this...I did not always feel that way. As a matter of fact ,within hours of the event I emailed to all my friends a blistering attack on Islamic fundamentalism. And while some things that happened that day, or did not happen that day, (and week I should say,) seemed odd, I was not immediately suspicious of the "story" being told on TV about the event.

It took me almost two years before I saw enough "official" information to make me realize that there was something, actually many things, that were very wrong. I came across so many disturbing, yet official and undisputed facts that I started asking others about it. Most people did not know what I was talking about. Nobody knew the details. So your answer is this...I don’t believe the official story because I know the official story! I don’t believe the conclusion, and the little tale of 19 buffoons overtaking our national defense all by themselves. The official position on that by the way, is that they, the FBI, have no proof of the identity of the so-called hijackers or that there were any hijackers at all. They are not listed on the passenger lists, but you would not know that.

So if you believe the conclusion to the official story, you had better know that story from start to finish. Don’t approach this they way the Kean Commission approached it, by starting out accepting the explanation as truth. Study the events, study the officially acknowledged body of evidence and study the people who told you the story in the first place...and I bet it won’t be long before you have as many questions as do I about that infamous day and about the people who control our government. And, of course, you’ll be saying, "I did not know this, is it true?"

Okay, then, who really was behind the attacks on 9/11?