Jan 26, 2015
Patrick Le Brun is a writer and activist who has written many articles for Counter-Currents. He has extensive experience with the French Identitarian movement. He is currently based in the United States, where he mentors college students who wish to engage in activism. Patrick joins us to give his unique perspective on the string of Paris shootings related to the Charlie Hebdo massacre. We begin with a look at some of the varied American alt media views on the events that transpired. We consider the Elite’s spin on the attacks used for their long term goals, with the general push that Mossad/Israel is behind the plot. Patrick spells out a number of details that would rule out Israeli involvement, and describes how Israeli false flags work. We talk about the history of the Kouachi brothers and Amedy Coulibaly, the many puzzling parts of their separate, violent sprees, the odd tactics of the police, and clues that the killers may have been linked to intelligence agencies. Patrick then explains the typical circumstances of young immigrants who turn to terrorism, the path of the Jihadist, and culture clash issues that are the result of a failed multicultural society. We look at what the conspiracies behind these events really could be, and shine a light on the rampant hypocrisy and sloppiness in government and police work. In the members’ section, Patrick gives a lesson on Jewish demographics and the Jewish destiny, underscoring the differences in Orthodox vs. Secular Jews, Ashkenazi and Sephardic Jews, and the tremendous double standards that keep many of the sub-groups divided. Further, Patrick illustrates the rising tide of Jewish citizens leaving France and Europe, and how a new influx of Jews into Israel is what is needed to strengthen Israel’s rank. In conclusion, we talk about Marine Le Pen’s well-poised position as a centrist candidate for France’s upcoming election. We also reflect on the growing numbers of people turning towards alternative news and information sources. 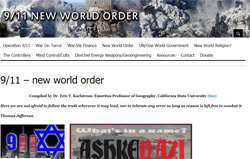