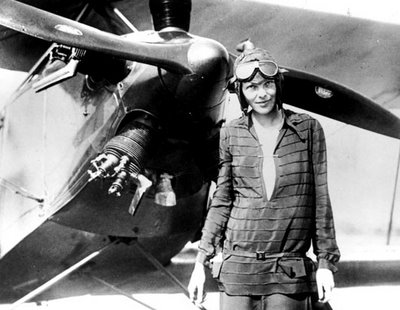 More than seven decades after aviator Amelia Earhart disappeared while attempting her ill-fated flight around the world, a British Columbia scientist hopes to extract DNA from letters she wrote to loved ones.

Dongya Yang of Simon Fraser University is aiming to harvest Earhart’s DNA from dried saliva on two envelopes she is believed to have sealed before posting letters from her various travels.

The forensic archeologist is trying to create a genetic profile that could be used to test whether bone fragments recently found on a South Pacific island are those of the famous aviator.

The fragments were found several hundred kilometres from where Earhart is believed to have disappeared over the Pacific Ocean in 1937.
"If we can create a DNA profile of her it’s going to be very useful for any kind of future claims" that recovered remains could be linked to Earhart, Yang said.

Yang came to the research by way of a Simon Fraser health sciences student, Justin Long, who asked Yang to use his DNA expertise to shed light on the Earhart mystery.

Long’s grandfather, Elgen Long, is considered an Amelia Earhart scholar and has collected about 400 of her letters.
The letters had been opened at the sides of the envelopes or with letter openers, leaving the seals intact for scientists to steam open to try to recover DNA.

Justin Long said Yang will be testing two letters Earhart penned to her mother. One of them was written on United Airlines letterhead while the aviator was travelling through Omaha, Neb.
"She didn’t have a secretary or husband or anybody with her so she most likely licked it and mailed it herself," he said of the research, which is partly funded by his family.

Long said Yang has a total of four letters to test, including one written by Earhart’s husband, George Palmer Putnam, so Yang could have comparison DNA of someone close to Earhart in case the letters were sealed by someone else.
Yang was also given a fourth letter written to Elgen Long by Earhart’s sister, Muriel Earhart Morrissey, who died in the Boston area in the mid-1990s, Long said.

Elgen Long, 88, said he has spent almost four decades collecting Earhart items and even has some of her clothing, which can’t be used to extract DNA because it’s been drycleaned.
The elder Long and his late wife also wrote a book about the celebrated aviator in the mid-1990s after travelling around the world for years and speaking with people who’d met Earhart and her navigator, Fred Noonan.

The pair left on their last journey from Lae, New Guinea, almost 74 years ago during an attempt to fly around the world following the equator. They never made it to the small island in the Pacific Ocean that was to be their next stop.

Their remains, and that of their twin-engine plane, were never found.
Earhart had already made history in 1932 when she became the first woman in the world to fly solo across the Atlantic Ocean.
Two years ago, researchers with the International Group for Historic Aircraft Recovery found a bone fragment on the island of Nikumarono, and believed it may be from one of Earhart’s fingers.

Justin Long said he doesn’t think those were Earhart’s remains.

"It’s an extremely unlikely area because ocean currents don’t support any debris or people floating in that direction. And it’s 653 kilometres away from where Earhart’s destination was in the Pacific, which was Howland Island."
His grandfather, a former pilot and aircraft accident navigator, said he will continue on his mission to find answers to the Earhart mystery.

His hope is that Yang is able to come up with a DNA profile of the legendary aviator.
"Her stepson, George Palmer Putnam III, is still alive, and he’s very interested in what we’re doing," Long said from Reno, Nev.

"It would be a confirmation of the work that my wife and I did for 35 or 40 years and, of course, we would be very, very pleased."

Yang said his goal is to get two kinds of DNA from the letters — mitochondrial DNA, which is inherited from the mother, and nuclear DNA, which comes from both parents.

"If we get DNA from the seal we’ll compare that one with her sister because they will share the same mitochondrial DNA. Then we’ll move to the next step for the nuclear DNA.

"Then we’ll look at more envelopes to see if we can get consistent DNA patterns."

Elgen Long said Earhart has some living relatives whose DNA would also be compared to Yang’s results.

He said a fourth expedition to Howland Island will be made in July 2012, on the 75th anniversary of the Earhart saga, as scientists try to find the remains of the aviator, her navigator and their twin-engine Lockheed model 10-E Electra aircraft.

"It’s one of the great aviation mysteries of the 20th century."