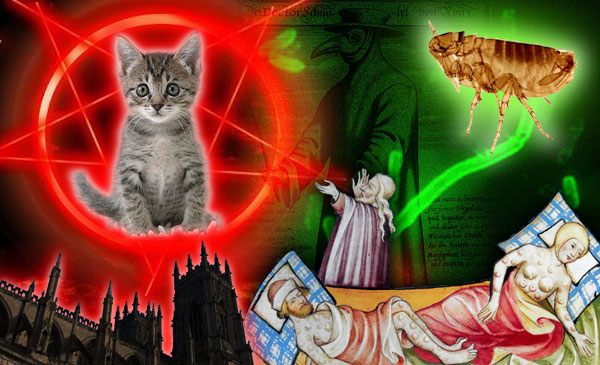 Ed Comment: This is a shocking account of how the ignorance of the catholic church created the conditions that lead up to the black death, one of the deadliest pandemics in human history, by simply associating the common house cat with satan. The black death is estimated to have killed 30% to 60% of Europe's population, reducing the world's population from about 450 million to between 350 and 375 million around 1400. The question have to be asked: Was this intentional? We know that "witches" were persecuted by various religious groups, and "witches" have strong association with cats. So was this a conspiracy by the catholic church to kill about 100 million people or was it simply because of ignorance, idiotic superstition and a screwed up theology? Whatever the case might be, the fruits of this backward organization is rotten to the core.

The black plague, also known as the black death, is a disease caused by the bacterium Yersinia pestis. It enters the body through the skin and travels via the lymph system. The bacteria live in the digestive tracts of fleas. The fleas, of course, live off blood from a host, and when the fleas swallow the blood, it becomes infected with the bacteria. As the bacteria multiply inside the flea, an intestinal blockage forms, starving the parasite because nutrients cannot be absorbed. The flea vomits in an effort to clear the blockage, and since the flea is starving, it feeds voraciously. When the infected flea vomits the diseased blood into a bite site on a host animal or human, the host becomes infected with black plague.

The disease was once devastating, and the resulting death was horrible. There were actually three forms of the black plague – the bubonic form, the pneumonic form, and the septicemic form. Victims of the bubonic plague suffered painful swollen lymph nodes in the neck and the underarms, called buboes. They were also wracked with high fever, vomiting, pounding headaches, and gangrene. Some were so weak that they barely had the energy to swallow.

The pneumonic form was even more punishing. As the body tried to fight off the disease, large amounts of phlegm were produced. The victims had to constantly cough up sputum in an effort to breathe, and more than ninety-five percent of the time, the patient drowned in his own body fluids. The pneumonic form of the plague didn’t need rats or fleas to spread – it was an airborne bacterium spread by the coughs of infected individuals.

Septicemic black plague was a form of blood poisoning and had a mortality rate of one hundred percent. With this type of plague, the individual suffered from high fever and purple blotches on the skin. Fortunately, this deadliest form was also the rarest.

From the middle of the 1300s until the 1700s, the black plague terrorized much of Europe and parts of Asia. Most historians believe the plague was first brought to Europe on ships from Asia. The most likely culprit was the black rats that often foraged among the ships’ holds for food scraps. These were smaller relatives of the brown rats.

The initial outbreak of the plague in fourteenth-century Europe was the most virulent. In fact, much of the populations of England and France were decimated. In some parts of England the death toll was 50%. Some parts of France suffered an astounding loss of ninety percent of their populations.

Many modern readers assume that there was only one outbreak of the black plague, but there were actually several. In fact, it raged through Europe about once every generation until the beginning of the eighteenth century. One of the last major outbreaks occurred in England with the Great Plague of London, which took place in 1665-1666. 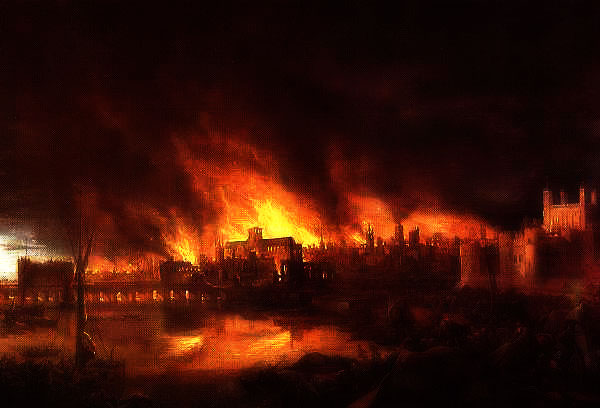 Was the great fire of London in 1666 "the final solution" to the plague problem?

Remember that the plague was spread by fleas that lived on rats. A viscious cycle kept the disease going. Infected fleas would bite a rat, and the rodent would become infected. Then other fleas biting the infected rat would become infected themselves. Once the host rat died of the plague, any fleas living on it would find themselves homeless and would go in search of a new host. Unfortunately, this often took the form of a human. When the sick infected fleas bit the human in order to feed, the human would become infected. So why didn’t the Europeans just keep plenty of cats around to kill the rats and thereby reduce the incidence of the plague? They had cats at the time. They were originally brought to Europe by the Romans, who had discovered the felines in Egypt. Keeping pet cats as mousers had become popular in Europe by the time of the first plague.

To fully answer that question, you need to understand the belief system of medieval Europe. Based on historical accounts and medieval art, people during this period were prone to many superstitions. The Catholic Church was the most powerful entity in Europe at the time, and the masses were consumed with the presence of evil and eradicating it in any form it might be believed to take. Because of their secretive nature and their ability to survive extraordinary circumstances, the general population came to fear cats as consorts of Satan. The innocent cats began to be killed by the thousands.

The cats ultimately got their revenge, of course. Since there were few felines left, the rat populations increased unchecked, and the plague grew even more widespread. You’d think that the humans would make the connection by this point, but instead, they made things even worse. They began to associate the plague’s new vigor with the cats and even with dogs. They believed that since both of these animals typically harbored fleas, they must be the cause of the plague. Subsequently, cats were outlawed in many parts of Europe, and huge numbers of cats and dogs were killed. In fact, at one point in the middle ages, there were barely any cats left in England at all.

Even though cat ownership was illegal in some regions, a few people kept their felines. Other people finally noticed that these cat owners often seemed to be immune to the black plague. Word spread quickly, and more observations of this phenomenon were noticed. This resulted in research, crude as it was during the time.

Eventually, it was decided that the rats, not the cats, were responsible for spreading the black plague. Then, of course, everyone wanted to own a cat or two. And since cats are prolific breeders, it didn’t take long for the demand to be satisfied. The laws which had been the cats’ death sentence were repealed. In many regions, a new law took its place – one that protected felines instead of banning them and almost causing their extinction in Europe.