In Clinton List, a Veil Is Lifted on Foundation 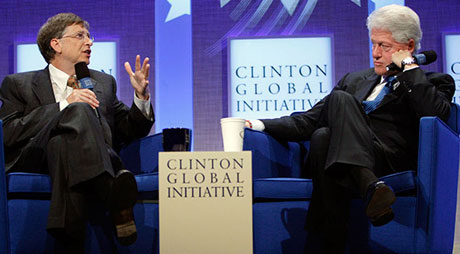 Former President Bill Clinton has collected tens of millions of dollars for his foundation over the last 10 years from governments in the Middle East, tycoons from Canada, India, Nigeria and Ukraine, and other international figures with interests in American foreign policy.

Lifting a longstanding cloak of secrecy, Mr. Clinton on Thursday released a complete list of more than 200,000 donors to his foundation as part of an agreement to douse concerns about potential conflicts if Senator Hillary Rodham Clinton is confirmed as secretary of state in the Obama administration.

The donor list offers a glimpse into the high-powered, big-dollar world in which Mr. Clinton has traveled since leaving the White House as he jetted around the globe making money for himself and raising vast sums for his ambitious philanthropic programs fighting disease, poverty and climate change. Some of the world’s richest people and most famous celebrities handed over large checks to finance his presidential library and charitable activities.

With his wife now poised to take over as America’s top diplomat, Mr. Clinton’s fund-raising is coming under new scrutiny for relationships that could pose potential conflict-of-interest issues for Mrs. Clinton in her job. Some of her husband’s biggest backers have much at stake in the policies that President-elect Barack Obama’s incoming administration adopts toward their regions or business ventures.

Saudi Arabia alone gave to the foundation $10 million to $25 million, as did government aid agencies in Australia and the Dominican Republic. Brunei, Kuwait, Norway, Oman, Qatar and Taiwan each gave more than $1 million. So did the ruling family of Abu Dhabi and the Dubai Foundation, both based in the United Arab Emirates, and the Friends of Saudi Arabia, founded by a Saudi prince.

Also among the largest donors were a businessman who was close to the onetime military ruler of Nigeria, a Ukrainian tycoon who was son-in-law of that former Soviet republic’s authoritarian president and a Canadian mining executive who took Mr. Clinton to Kazakhstan while trying to win lucrative uranium contracts.

In addition, the foundation accepted sizable contributions from several prominent figures from India, like a billionaire steel magnate and a politician who lobbied Mrs. Clinton this year on behalf of a civilian nuclear cooperation agreement between India and the United States, a deal that has rankled Pakistan, a key foreign policy focus of the incoming administration.

Such contributions could provoke suspicion at home and abroad among those wondering about any effect on administration policy.

Matthew Levitt, a senior fellow at the Washington Institute for Near East Policy, said donations from “countries where we have particularly sensitive issues and relations” would invariably raise concerns about whether Mrs. Clinton had conflicts of interest.

“The real question,” Mr. Levitt said, “is to what extent you can really separate the activities and influence of any husband and wife, and certainly a husband and wife team that is such a powerhouse.”

Mr. Clinton’s office said in a statement that the disclosure itself should ensure that there would be “not even the appearance of a conflict of interest.”

Stephanie Cutter, a spokeswoman for Mr. Obama, said the president-elect had chosen Mrs. Clinton for his cabinet because “no one could better represent the United States.”

“Past donations to the Clinton foundation,” Ms. Cutter said, “have no connection to Senator Clinton’s prospective tenure as secretary of state.”

Republicans have addressed the issue cautiously, suggesting that they would examine it but not necessarily hold up Mrs. Clinton’s confirmation as a result. Senator Richard G. Lugar of Indiana, the top Republican on the Foreign Relations Committee, which will consider her nomination, was in Russia on Thursday and unavailable for comment, according to Mr. Lugar’s office.

But in an interview on Nov. 30 on “This Week” on ABC, Mr. Lugar said Mr. Clinton’s activities would raise legitimate questions, adding, “I don’t know how, given all of our ethics standards now, anyone quite measures up to this who has such cosmic ties.”

Still, he indicated that he would vote for Mrs. Clinton and praised Mr. Obama’s team for doing “a good job in trying to pin down the most important elements” in its agreement with Mr. Clinton.

To avoid potential conflicts, the Obama team, represented by its transition co-chairwoman, Valerie Jarrett, signed a memorandum of understanding on Dec. 12 with the William J. Clinton Foundation, represented by its chief executive, Bruce R. Lindsey. The five-page memorandum, provided to reporters on Thursday, required Mr. Clinton to disclose his past donors by the end of the year and any future contributors once a year.

The memorandum also requires that if Mrs. Clinton is confirmed, the Clinton Global Initiative, an offshoot of the foundation, will be incorporated separately, will no longer hold events outside the United States and will refuse any further contributions from foreign governments. Other initiatives operating under the auspices of the foundation would follow new rules and consult with State Department ethics officials in certain circumstances.

Federal law does not require former presidents to reveal foundation donors, and Mr. Clinton had until now declined to do so, arguing that many who gave expected confidentiality. Other former presidents have taken money from overseas sources, including President George Bush, whose son has sat in the Oval Office for the last eight years. The elder Mr. Bush has accepted millions of dollars from Saudi, Kuwaiti and other foreign sources for his own library.

Mr. Clinton’s foundation has raised $500 million since 1997, growing into a global operation with 1,100 paid staff members and volunteers in 40 countries. It said it had provided medicine to 1.4 million people living with H.I.V./AIDS, helped dozens of cities reduce heat-trapping gases and worked to spread economic opportunity.

Mr. Clinton’s advocates said that the disclosure on Thursday showed he had nothing to hide and that most of his largest contributors were already known.

Yet while unprecedented, the disclosure was also limited.

The list posted on the foundation’s Web site — www.clintonfoundation.org — did not provide the nationality or occupation of the donors, the dates they contributed or the precise amounts of their gifts, instead breaking down contributors by dollar ranges. Nor did the list include pledges for future donations. As a result, it is impossible to know from the list which donations were made while Mr. Clinton was still president or while Mrs. Clinton was running for president.

Another potentially sensitive donation came from Blackwater Training Center, part of the private security firm hired to protect American diplomats in Iraq. Five of its guards have been indicted for their roles in a 2007 shooting that left 17 Iraqi civilians dead.

The potential for appearances of conflict was illustrated by Amar Singh, a politician in India who gave $1 million to $5 million. Mr. Singh visited the United States in September to lobby for a deal allowing India to obtain civilian nuclear technology even though it never signed the Non-Proliferation Treaty. He met with Mrs. Clinton, who he said assured him that Democrats would not block the deal. Congress approved it weeks later.

Other donors have connections with India, a potential flashpoint because of tensions with Pakistan. Among them was Lakshmi Mittal, a steel magnate and, according to Forbes magazine, the fourth-richest person in the world. Mr. Mittal, who donated $1 million to $5 million, was involved in a scandal in 2002 in London, where he lives. After Mr. Mittal made a large donation to the Labor Party, Prime Minister Tony Blair helped him persuade Romania to sell him its state steel company.

Another donor was Gilbert Chagoury, a businessman close to Gen. Sani Abacha of Nigeria, widely criticized for a brutal and corrupt rule.

Mr. Chagoury tried during the 1990s to win favor for Mr. Abacha from the Clinton administration, contributing $460,000 to a voter registration group to which Democratic officials steered him, according to news accounts. He won meetings with National Security Council officials, including Susan E. Rice, who is now Mr. Obama’s choice to be ambassador to the United Nations.