The Death Squad Network Behind the JFK Assassination

Feb 26, 2014
Ole Dammegård is an independent investigator, author and former journalist. For some 30 years he has been researching and working on exposing some of the biggest conspiracies around the globe. He is the author of "Coup d’etat in Slow Motion," a book where he presents evidence for who was behind the assassination of Swedish Prime minister Olof Palme, one of the world's greatest murder mysteries. His extensive investigation has also revealed incredible links to other big political 'events' like the assassination of JFK, John Lennon, Robert Kennedy, Che Guevara, and Salvador Allende as well as the cold-blooded sinking of m/s Estonia. In this two hour special Dammegård talks about the death squad network behind the assassination of JohnF.Kennedy. He names names, lists the members of the network and presents evidence for how the assassination was executed. We discuss the relationships between people in Operation 40, which is the Central Intelligence Agency sponsored undercover operation. Also, we speak about lesser known people who were involved. Ole pieces together the puzzle around the assassination and asserts that some people in the network have continued their murderous activities to this day. 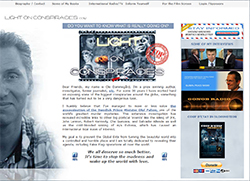